Congressman Louie Gohmert: John Bohner Will Be Gone By January 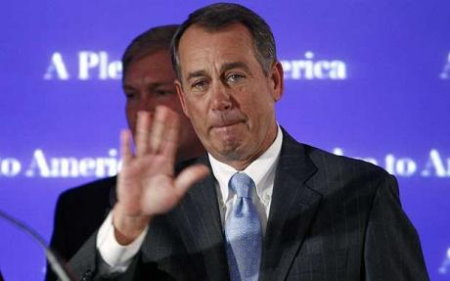 One of the tea-party leaders in Congress believes the days of Rep. John Boehner, R-Ohio, as speaker of the House of Representatives are numbered.

Rep. Louie Gohmert, R-Texas, told WND he predicts Boehner will no longer be speaker “by next January,” regardless of the outcome of the midterm election in November.

The Texan doesn’t think it will take a coup to remove Boehner, believing the tide is already moving in that direction, and saying, “I think people are ready for a change.”

And Gohmert would see that as a change for the better, because, he says, “We’ve got to have someone who is smart enough to realize” it was (Sen. Majority Leader) Harry Reid (D-Nev.) who shut down the government, not the GOP.

…Gohmert feels GOP leadership is making a key mistake by listening to insiders like Rove more than tea-party voters, and he cited last autumn’s government shutdown as an example.

The Texan was encouraged when Boehner initially supported the effort of conservatives to defund Obamacare in September as part of an attempt by Republicans to broker a deal with Democrats to keep the federal government funded.

But, after the battle was lost, the congressman was particularly disappointed when Boehner went on “The Tonight Show,” called the government shutdown a disaster and blamed conservatives, even though, Gohmert said, they tried “compromise after compromise.”

The congressman took exception when Boehner said he knew it would be a disaster to shut down the government, “but he decided to go along because that’s what people wanted.”

“I thought he had an actual change of heart,” said the congressman, but, he added, “He just wanted to stay in his leadership position.”

Should House conservatives try to replace Boehner as speaker?

“I’ve already sought to do that,” he said. “I think we’ll have a new speaker next January. Hopefully, a Republican. I think we’ll have a new speaker because the tide is going in that direction. Because we have got to have someone who recognizes that when we compromise over and over, and when Harry Reid says, ‘It’s my way or a shutdown, no compromise, no negotiations,’ it is Reid who shutting down the government.”

That’s when Gohmert said, softly, “We’ve got to have someone who is smart enough to realize that, so I guess that will take a change in leadership.”

John Boehner has no charisma, nobody trusts him, he’s a terrible strategist, he’s hostile to grassroots conservatives and Democrats assume that he’s going to cave in every negotiation. We can’t flush him out of a leadership position in the Republican Party fast enough.

10 Musicians Who Should Be Blacklisted By Conservatives[3]