Republicans like Peter King, John McCain, Lindsey Graham, Devin Nunes and Lamar Alexander worked overtime to undermine the fight against Obamacare and today, it looks like they’re going to get their way. Mitch McConnell happily signed on to a complete surrender to Barack Obama. Obama is even getting a new one year break for his union pals in return for allowing John Boehner and Mitch McConnell to prostrate themselves at his feet. 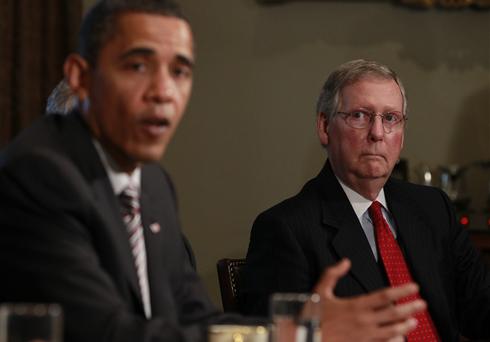 McConnell is fully on board and John Boehner is preparing to violate the Hastert rule in order to facilitate surrender, but conservative groups are still begging them not to sell us down the river again.

“Key Vote: “no” On Senate-Negotiated Spending And Debt Deal.” — Heritage Action For America[2]

“The Club for Growth urges all House and Senate members to vote “NO” on the Reid-McConnell plan to end the shutdown and raise the debt ceiling. Consideration of the bill will likely be today or tomorrow. The vote will be included in the Club’s 2013 Congressional Scorecard.” — Club for Growth[3]

Following news that Senate Minority Leader Mitch McConnell and Senate Majority Leader Harry Reid proposed a bill that would raise the debt ceiling, temporarily fund the government until January 15, and go to conference on the budget at a later date, FreedomWorks President Matt Kibbe released the following statement:

“Republican leadership has completely lost its way. Not only is this proposal a full surrender- it’s a complete surrender with presents for the Democrats. Apparently Mitch McConnell’s idea of a ‘compromise’ is to increase the debt limit, fully fund a broken health care law, and promise talks of increasing spending down the road.”

“This bipartisan betrayal is the TARP Wall Street bailout all over again. The line separating the Democrats and the Republican establishment is fading- it might have disappeared today. This is about Washington insiders versus the rest of America now.”

FreedomWorks will issue a Key Vote “NO” against the McConnell-Reid capitulation plan, which will be scored on its 2013 economic scorecard. — Freedom Works[4]

Even if you have a great army (and we certainly don’t in the Senate), it doesn’t matter if you don’t have competent generals that are willing to fight. Tonight, if Republicans surrender, it won’t be because they had to, it’ll be because they chose to do so.