We were all shocked[1], or maybe not so much, this week when John McCain joined Susan Collins and Lisa Murkowski in voting down the Republican’s Obamacare repeal. 48 Democrats joined with the three turncoats to put the final nail in the coffin of the American healthcare system. My theory is McCain was a sacrificial lamb. He was providing cover for other Republicans, so it would appear they voted for the repeal, when they really wanted it to fail. McCain, who was just diagnosed with brain cancer, took the hit for the team even though it hurt his constituents.

In the past, McCain has repeatedly called for the repeal of Obamacare. But when do or die came, he gave the thumb’s down in this deadly Game of Thrones. It may also be that he hates President Trump so much, he just wants to screw with his agenda. Whatever the reasoning was, it was treacherous. There were literally gasps from the Senate floor when he pulled this. Ted Cruz is right[2] when he says there will be a reckoning and no party can remain in power by lying to those who gave them that power. 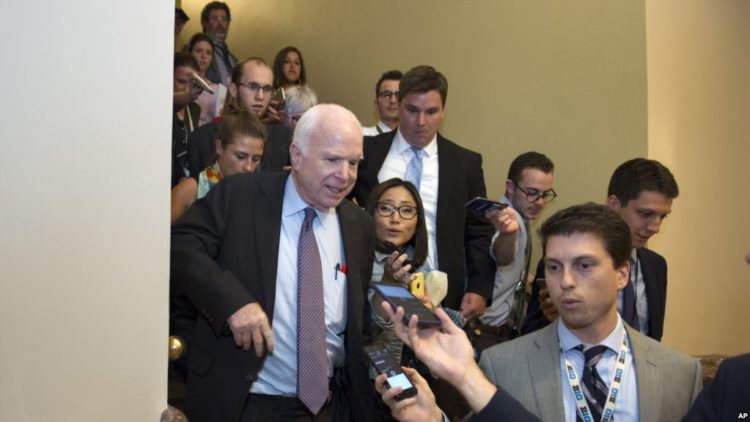 “From the beginning, I have believed that Obamacare should be repealed and replaced with a solution that increases competition, lowers costs, and improves care for the American people. The so-called ‘skinny repeal’ amendment the Senate voted on today would not accomplish those goals. While the amendment would have repealed some of Obamacare’s most burdensome regulations, it offered no replacement to actually reform our health care system and deliver affordable, quality health care to our citizens. The Speaker’s statement that the House would be ‘willing’ to go to conference does not ease my concern that this shell of a bill could be taken up and passed at any time.

“I’ve stated time and time again that one of the major failures of Obamacare was that it was rammed through Congress by Democrats on a strict-party line basis without a single Republican vote. We should not make the mistakes of the past that has led to Obamacare’s collapse, including in my home state of Arizona where premiums are skyrocketing and health care providers are fleeing the marketplace. We must now return to the correct way of legislating and send the bill back to committee, hold hearings, receive input from both sides of aisle, heed the recommendations of nation’s governors, and produce a bill that finally delivers affordable health care for the American people. We must do the hard work our citizens expect of us and deserve.”

Given, the so-called ‘Skinny Repeal’ was awful. But McCain didn’t vote for it because it did not offer a replacement. It shouldn’t have. The reason I didn’t like it was that it would still cause premiums to go up 20 percent. If they had just done Ted Cruz’s actual repeal, we wouldn’t be in this mess. But there are Republicans who want the pork it offers and the kickbacks from the insurance companies after they get their bailout. In other words, corruption.

Now, premiums won’t just go up 20 percent. As Obamacare implodes, they will skyrocket even higher than the 140 percent they have risen in the last year. At the end of the implosion, we may be forced into single payer healthcare and a lot of that can be laid at McCain’s feet. But then again, it’s what many of the progressive RINO Republicans had in mind all along. McCain will leave soon now… I wish he had never returned.