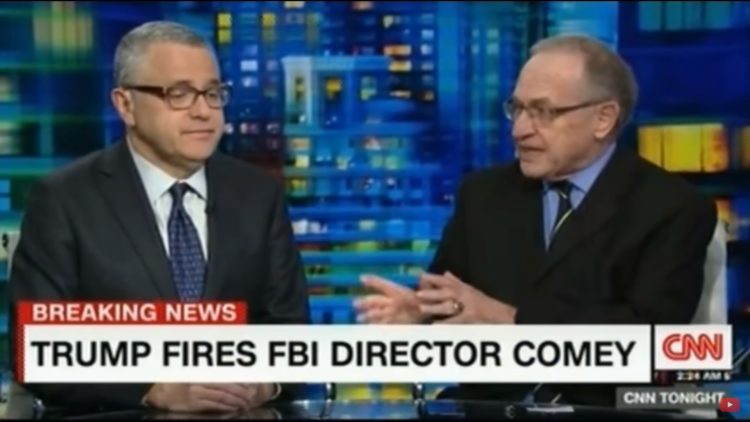 Just last night, Harvard Law School professor emeritus Alan Dershowitz gave an interview with CNN’s Don Lemon defending President Trump’s decision to fire the now former FBI director, James Comey. Dershowitz said Trump was “well within his rights” as President to fire a department head and that there was “no need for a special prosecutor in the investigation into possible collusion between Russia and the Trump campaign.”

As reported in Breitbart[2], Dershowitz’ appearance on CNN is well worth the time to watch, if just for the fireworks between him and CNN’s legal analyst:

Dershowitz appeared next to CNN legal analyst Jeffrey Toobin, who was apoplectic. “The fact that he did this will disgrace his memory for as long as this presidency is remembered. There is only one date that will be remembered after Januarth 20th so far in the Trump presidency, and it is the day of the ‘Tuesday Night Massacre,’” Toobin said, referencing President Richard Nixon’s firing of Special Prosecutor Archibald Cox during the Watergate scandal.

Toobin had also told CNN’s Anderson Cooper earlier that Trump would likely name a “campaign stooge” as Comey’s replacement at the FBI.

“Should Comey be the director of the FBI? The answer to that is no,” he said, noting that he had called earlier for Comey to resign. “He lost his credibility. … A lot of this is his fault.”

Who will the President hire? If Trump finds an amazing new director, “this date will not go down … in history because we will have been proved wrong that it was some kind of a cover-up if he picks somebody who can pursue the investigation.”

And lastly, why doesn’t Congress establish its own independent commission to continue on with the Russian allegations?

The slaughter by the Professor continued, as CNN’s analyst tried to attack:

When Toobin objected that Trump had fired former Acting Attorney General Sally Yates and former U.S. Attorney Preet Bharara as well as Comey, “all three of whom had the potential to investigate and trouble the Trump presidency,” Dershowitz argued that they were all Democrat appointees and had all been dismissed appropriately by a Republican president.

You can watch the fantastic exchange right here, as well as watch Don Lemon struggle to defend Toobin.

In John Hawkins’ new book, ‘101 Things All Young Adults Should Know’, he teaches in number 16 of the book that you should be nice until it’s time not to be nice. With all the liberals who screamed for Comey to be fired back in November for supposedly throwing the election for Hillary, now is not the time to let those same liberals continue to walk over us with their fake outrage. Now is the time to use every point that Dershowitz made on CNN to shut them down.