Last Friday[1], Donald Trump released a very powerful, hard-hitting ad that highlighted illegal immigrants and crime. Jamiel Shaw lost his son to an illegal immigrant gang member who gunned him down in the street. He mistook the color of Jas Shaw’s backpack as a gang color. From the beginning, Trump and Shaw have stood together and Trump has promised Shaw there would be justice for his son. Trump has praised Jamiel many, many times. Jamiel has campaigned for Trump non-stop right from the start of his campaign. He fervently believes in Donald Trump and it shows. 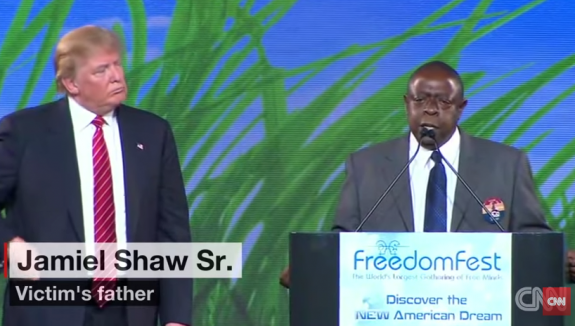 The ad includes photos of Jas Shaw, a 17 year-old football star, who was gunned down outside his home by an illegal gang member who just got out of prison.

Shaw recounted to the Washington Examiner why he chose to support Trump who has been criticized by some as a racist and a phony. It started on March 2, 2008, in the Arlington Heights neighborhood of Los Angeles were Jas had been walking home, talking with his girlfriend on a cellphone. He was three doors down from his house when a car pulled up by him. Two Hispanic men in the vehicle asked Jas which gang he belonged to. Police reports indicate Jas did not respond and then one of the men pulled out a gun and shot the teen. Jamiel heard the shots and ran outside to find his son bleeding from bullet wounds. Jas later died at the hospital. Trump unexpectedly reached out to Shaw last year about the murder and asked for a meeting at the Beverly Hilton Hotel in Los Angeles, which left Shaw stunned. “To see somebody, especially a billionaire, come out. I can’t even get a neighborhood politician to come out, that’s why it’s so surreal to me,” Shaw said. “People are looking at immigration as just an immigration issue, but people are dying. It’s a fact. What good is the economy, healthcare, going to school, if people are dying?” Shaw asked. “Trump is doing things he doesn’t have to do. He can buy a whole island and get away from crime.” Trump has given this man hope and way to go on. The ad is sure to appeal to Americans who want the law followed and illegal immigration and the refugee resettlement program stopped. 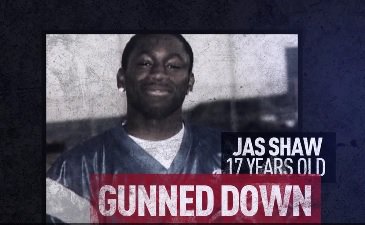