It was only a matter of time before this happened.[1] Look for it to get much worse. Politico makes a big deal out of a Trump supporter spitting on and cursing at a Black Lives Matter jerk. First off, there is no context. What did the radical say and do before that happened? Second, I’m not sure you can blame the guy. He’s obviously had it with these racist, commie thugs. I know I have. The crowd raged over this. I’m surprised there wasn’t a bigger brawl. Guess the state police got there in time and hauled away the disrupters. Black Lives Matter thugs and Latino radicals crashed the Trump rally in Richmond, Virginia and this time people fought back. There were 5,000 people there and they were ticked. Trump tried to calm the crowd and eventually things settled back down after about 30 minutes of confrontation. Trump is a brave guy, I’ll give him that. 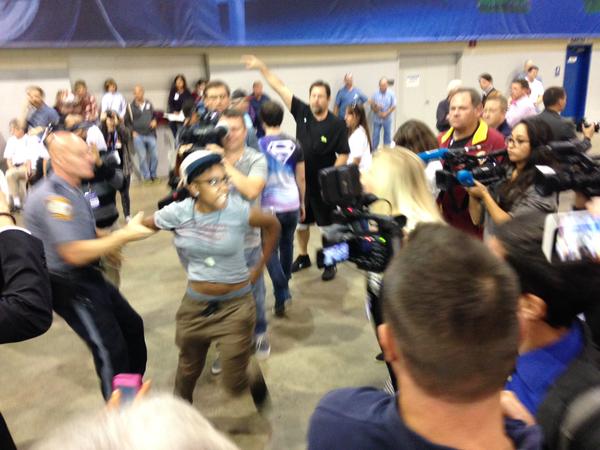 There were reports that ‘small fights’ had broken out between the protesters and Trump supporters.

A cellphone video shows an apparent Trump supporter arguing with and then spitting on a protester. One report said the disruptions lasted for around thirty minutes.

When the protesters first made their presence known in the capacity crowd of about 5,000, Trump responded by saying, “That’s why we have freedom of speech, folks!”, according to a video excerpt of his speech posted to You Tube.

Photos posted to twitter by reporters at the rally, which was held at a large hall on the grounds of Richmond International Raceway, show uniformed Virginia State Police officers manhandling and ejecting several protesters. Other photos show ‘in your face’ verbal clashes between the protesters and Trump supporters. 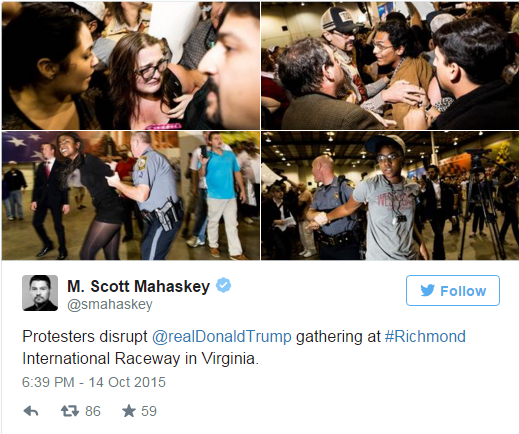 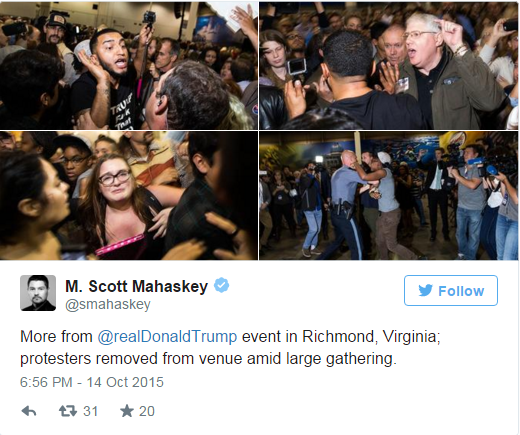 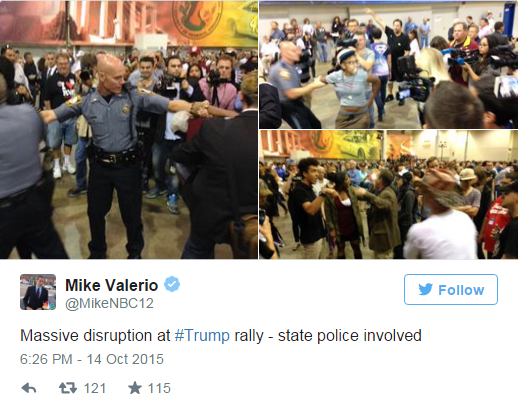 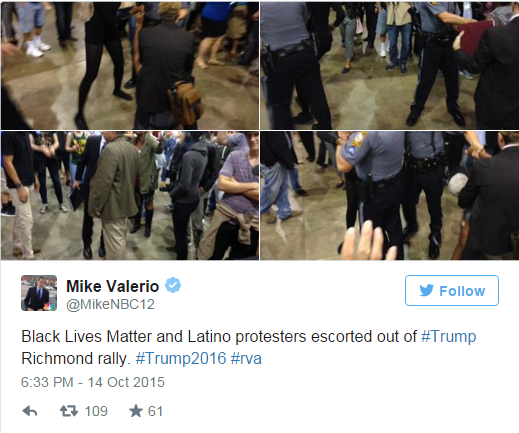 “Trump supporter spits & curses at protester as protesters are escorted from @realDonaldTrump event in Richmond, VA”

Notice it was the Black Lives Matter and Latino activists who were ejected and arrested. They are going to ramp this up – they want riots and confrontations over Trump. The crowd roared, “We Love Trump!” And the fights ensued. Meanwhile, Trump will just get more and more popular. This doesn’t work against him. It will propel him forward. Americans are fed up with these radicals and have had it with them. They want a fighter who will stand up to him. Trump’s not backing down. Trump doesn’t fold like Bernie Sanders and he doesn’t engage them like Clinton. They aren’t worth it and they deserve to be dismissed. I’m actually surprised the crowd didn’t beat them into a bloody pulp. There’s always next week. Giddy up folks… things just escalated.