Last night the first two major Republican Party primary debates were held and by many accounts these were the best two debates held for years. But they were Republican debates and when candidates were asked to pledge not to run third party one candidate refused to make the pledge. And we all can guess who that was, right? 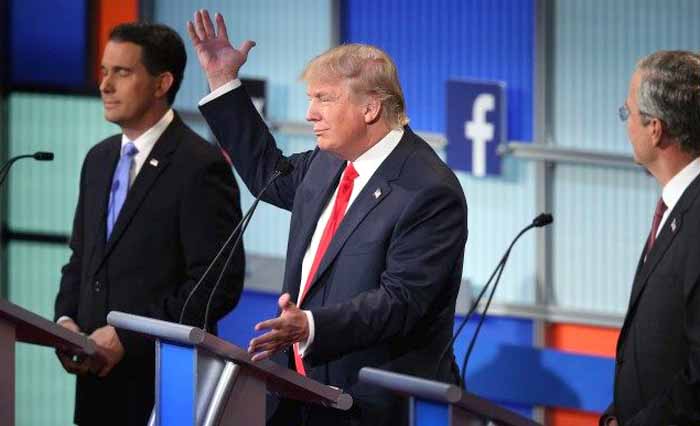 Right at the top of the first tier debate held Thursday evening, the Fox News hosts asked[1] if the ten top polling candidates would pledge not to run third party if they don’t get the nomination.

“Gentlemen, we know how much you love hand raising questions so we promise this is the only one tonight,” Fox News’ Bret Baier opened the debate by asking. “The only one. Is there anyone on stage—can I see hands—who is unwilling tonight to pledge your support to the eventual nominee of the Republican Party and pledge to not run an independent campaign against that person? Again, we’re looking for you to raise your hand now, raise your hand now if you won’t make that pledge tonight.”

“Mr. Trump. Mr. Trump, to be clear, you’re standing on a Republican—“ Baier started to follow up.

“The place where the RNC will give the nominee the nod,” Baier interrupted.

“And the experts say an independent run would almost certainly hand the race over the Democrats and likely another Clinton. You can’t say tonight that you can make that pledge?” Baier followed up.

“I cannot say,” Trump responded. “I have to respect the person that if it’s not me, the person that wins. If I do win–and I’m leading by quite a bit–that’s what I want to do. I can totally make the pledge if I’m the nominee. I am discussing it with everybody. But I’m talking about a lot of leverage. We want to win and we will win. But I want to win as the Republican. I want to run as the Republican nominee.”

…”I will not make the pledge at this time,” Trump replied.

And then Senator Rand Paul jumped on Trump’s refusal pointing out that this proves that Trump has no political principles.

“This is what’s wrong. He buys and sells politicians of all stripes,” Paul said of Trump.

So, there you have it. Trump won’t eschew a third party run if he doesn’t win the nomination…. at least now. So, what do you think?

Here is a link to the full transcript of the August 6 GOP debate[2] in case you’d like to track down the exact words used by your favorite candidate.