When he was governor of Florida, Jeb Bush called Abe Lincoln our “Presidente,” not our president. But it’s worse than you might think. He didn’t use this in a pandering speech to some Hispanic group. He used it in a private email. This shows that Bush thinks more like a politician pandering to Hispanics than he does an American. 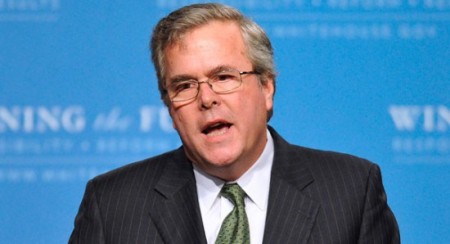 The revelation came from a story[1] in the Washington Post that detailed how Bush handled the removal of a Confederate flag from Florida’s capital grounds.

In his report, the Post’s Ed O’Keefe explained that Bush quietly removed a flag from the Florida capitol grounds and decided not to support a proclamation for a Confederate History Month, but after news reports broke over the flag’s removal, Bush received emails expressing disappointment in his decision.

One of the emails O’Keefe highlighted ironically had Bush using the word “presidente” instead of “president” – which wasn’t discussed in O’Keefe’s report, but Bush’s choice of wording is ironic in light of his stance on immigration – with many Republicans criticizing Bush by arguing that he isn’t tough enough on that issue.

Note what this means. It means that in his head, in his normal pattern of speech, Jeb Bush would rather use Spanish words than English words.

It IS rather ironic that he thinks like a foreign Hispanic instead of an American, isn’t it?