President: Barack Obama: blasted: Republican lawmakers: in his weekly address Saturday for going on: vacation during the holidays: and neglecting “a mother who needs help feeding her kids.” 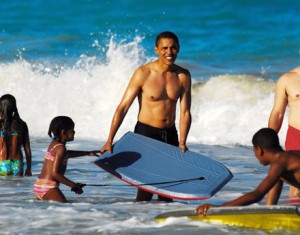 While apparently sitting in his Hawaiian vacation home, the president delivered hisweekly address: Saturday, in which he said:

Just a few days after Christmas, more than one million of our fellow Americans lost a vital economic lifeline — the temporary insurance that helps folks make ends meet while they look for a job. Republicans in Congress went home for the holidays and let that lifeline expire…

I might add that Democrats in Congress also “went home for the holidays.” That’s what people do on Christmas, Hanukkah and New Year’s – as did the president.

Obama used the address to lay out what he thought were the ramifications of Republicans playing hooky from Congress on Christmas, saying:

…We make this promise to one another because it makes a difference to a mother who needs help feeding her kids while she’s looking for work; to a father who needs help paying the rent while learning the skills to get a new and better job. And denying families that security is just plain cruel. We’re a better country than that. We don’t abandon our fellow Americans when times get tough — we keep the faith with them until they start that new job.

With the Obama administration expanding the food stamp program, one would be hard-pressed to find “a mother who needs help feeding her kids while she’s looking for work.”

Then there’s the “wisdom” of extending unemployment benefits. By doing so, Congress would merely be nipping around the edges of a sluggish jobs market, instead of addressing the root cause of unemployment.

But most of all, there’s the sheer hypocrisy of the president scolding elected officials for taking a vacation while he sits back and enjoys the holidays.

No matter what one may think of Franklin D. Roosevelt’s administration, he used his weekly radio “fireside chats” to bring a troubled nation together. Obama is using his own version to divide the nation.