John McCain: The MOST Reliable Senator.

On Monday, Joe took my senior Senator to task. Joe was pretty hard on Senator McCain with comments like this: 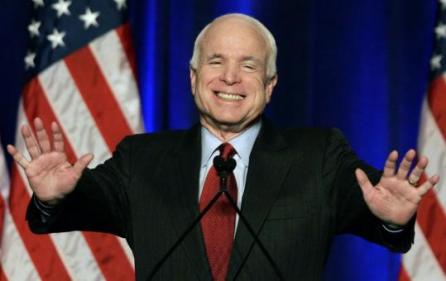 I hold you in utter contempt, as do a great many Americans; you have made a mockery of your service to this great nation, getting far more mileage out of our pity than our embrace, and I call on every Veteran to stand against you and stand against your next election campaign. It’s clear that you would stop at nothing to help Obama and his regime, and your actions in recent years have given me, and many like me, no choice but to revoke my respect for you and for your so-called “service” to our country.

Being the good and fair guy that Joe is, he asked me if I’d like to respond on behalf of conservatives in Arizona.:  Well, even though I do have an outsized ego, I really don’t speak on behalf of all the conservatives in my beautiful home state, but I do speak for a couple.:  I really think Joe is getting old and soft, or maybe it’s just because he lives a long way away, but I really think he was way too kind to my senior Senator.:  He probably paid more attention to his mom than I paid to mine when we were both told, “If you can’t say something nice…”:  Anyway, about Senator McCain.

In memory of my mom telling me that, let me note that John McCain has never met a constitutional amendment he liked or a TV camera he didn’t.:  Or, a position he wasn’t willing to sell out.:  There, that takes care of saying nice things.

I’m not going into lots of detail because I’d be writing until well into next year with a documentation of ever instance of McCain’s two faced behavior.:  I’m just going to note a couple things that are near and dear to my dart board.

First, there’s “immigration reform”.:  During the Bush years Senator McCain was the lead guy working with that paragon of Senatorial virtue, Teddy Kennedy, on granting amnesty to 15 million or so illegal aliens who he prefers to refer to as “undocumented workers” doing jobs Americans won’t do.:  McCain was unabashed in his promotion of amnesty for illegals and resisted any efforts to secure the border in any kind of real terms.:  His best statements were documented by: ABC News[2].

In a: 2007 Vanity Fair interview[3], McCain said, “I think the fence is least effective. But I’ll build the g..damned fence if they want it.”

A year later in September 2008, on the eve of the presidential election, McCain told the Spanish-language station: Univision[4]: that his plan did not include “walls and fences.”

Then his 2010 election rolled around and he made this commercial.

“Build the dang fence.”:  Right.:  In a series on illegal immigration,: I documented[5]: the conditions on the Arizona border with Mexico.:  They’re not quite as bad as the South Side of Chicago, but they’re close.:  The most apt comparison is that nobody in power — including and especially John McCain — gives a damn about either Chicago or southern Arizona.

And the proof of that is that soon after his 2010 reelection McCain morphed right back to “Fence?:  What fence?”:  He headed up the Gang of Eight, working with Dick Durbin to insure amnesty for 15 million illegal aliens and now we’re adding in fast track amnesty for about 35 million of their families too.

John McCain never met an undocumented Democrat he didn’t like.

Second, and last, there’s ObamaCare.:  Here’s what my senior Senator had to say about ObamaCare in 2010.:  When he was running for reelection.

Well, here’s what Senator McCain had to say about Ted Cruz’ marathon speech against ObamaCare: earlier this summer[6].

As with illegal immigration, John McCain can be counted on to voice his support for his position of the moment, a position that will paint him in the best light with the people he most wants to impress.:  Unfortunately, he’s only interested in impressing his Arizona constituents for about six months every six years.:  The rest of the time he’s pandering to the press.

Yesterday he: lauded[8]: Obama’s foreign policy address, promising to support a rewriting of the 2001 authorization of military force. “Such legislation would be a fitting legacy for this Congress – and for President Obama,” he said. Perhaps McCain has gotten past his bitterness from 2008. Or maybe he’s just found different people to be bitter about.

And now, he’s talking about running for reelection in 2016.

Senator McCain, on behalf of me and my sweet wife, you can rot in hell.:  You’ve consistently lied to Arizona voters for at least the last 20+ years, you are not a “conservative” in any way, shape, or form.:  You’re a disgusting, two-face, senile, son-of-a-bitch who can be reliably counted on to change your tune with the change of the crowd.:  You’re a pathological liar and a media whore.:  I wouldn’t piss on you if you were on fire let alone vote for you, and on your best day you don’t rise to level of mere “contempt”.

So, in closing, Senator McCain please move your belongings out of your Arizona residence — you’re only here to campaign anyway, you’ve probably forgotten what Cindy looks like — and park them in your Washington DC condo.:  That’s where you belong and those are the people you represent.:  You sure as hell don’t represent the people of Arizona.

This post was used with the permission of Joe for America[9].