Lindsey Graham Loses Temper…Tells Heckler To Shut Up, Then Gives Him The Boot [VIDEO] 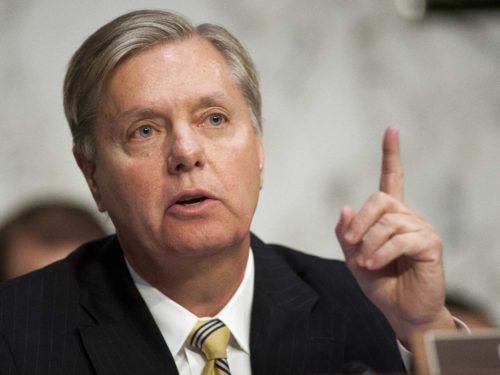 The current fad among trendy Leftists and Democrats, in addition to continued crying about the election results, is to crash GOP town hall [2] meetings and pretend to be angry Republicans. They jeer and heckle, shout down opening prayers and the Pledge of Allegiance, and generally make a rude nuisance of themselves. All for a nice little paycheck from the Democrats, no doubt.

At a recent town hall in Clemson, SC, Senator Lindsey Graham was among the recent victims of these rabble-rousers. Graham, an early critic of President Trump, who now says he’s on board the Trump Train, was being heckled by a typical rude town hall crasher, when he became exasperated and told the man:

“I tell you what, you’re going to get kicked out in about 30 seconds if you don’t shut up. How many want to kick this guy out?” The crowd responded enthusiastically although initially the man was allowed to stay. Finally, after continued interrupting, Graham waved and said “Get him out of here.”

Graham assured attendees that “I’m going to try to help our president, Donald Trump, be as successful as possible because, number one, I agree with him mostly and I’d like to get this country moving again.”

Well, I guess we will see Senator Graham. You don’t exactly have a solid record of being a team player in the GOP. The ball is in your court. America waits to see if you help our President to be successful at making America great again. What this means in real life is that when the time comes to stand behind Trump’s agenda and against those trying to tear him down, you step up and support him. Will you?

See video of town hall below.