Marco Rubio Steps Up As Squishy Republican Spokesperson For Shamnesty

The more we learn about the Gang Of 8 immigration bill, the more we find out just how flawed it is. Liberals seem to love it, which should be the first clue that when all is said and done, it will simply be an amnesty bill. Shame. They could have done something that made sense, that truly put teeth in securing the southern border, holding those who come legally first and then overstay their visas accountable, and finding ways to do what we can to make sure that people do not become illegal aliens (such as holding companies that hire them accountable with massive fines and criminal penalties and restricting public money and services from them). Alas, no. And Rubio is ruining his brand. 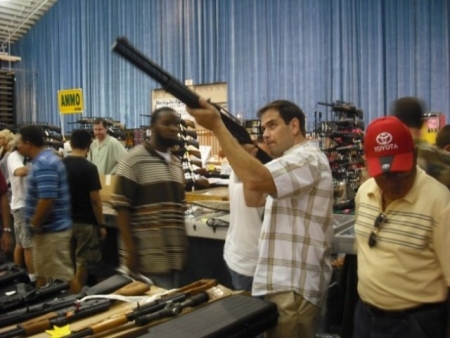 When Rubio was done, Larson’s first three callers complained that the bill would reward people who broke the law to be here, and they didn’t believe the border would be secured as the senators promise.

The interview illustrated that Rubio, a Republican and favorite of the Tea Party, will have difficulty convincing conservatives who have helped kill past attempts at immigration overhauls that the time is right to back his effort.

At this point Rubio is appearing to be more of a John McCain/Lindsay Graham Republican squish. He’s essentially on a “charm offensive” to sell this crap-burger of an immigration bill to Conservatives, a bill which is set up similar to Obamacare. Remember how far left Democrats threw in a few features that were popular, such as not being able to be denied insurance for pre-existing conditions? Yet, those were surface offerings, simply designed to make that crap-sandwich popular while the other 90% of Obamacare was horrific. Same with this Gang of 8 immigration bill.

But other Republicans said that Rubio is just what the party needs right now. Sen. John McCain, R-Ariz., has been candid about the need to gain ground with Hispanic voters after GOP presidential nominee Mitt Romney garnered only 27% of the Hispanic vote in the 2012 election.

Lionel Sosa, a San Antonio-based media consultant who advised the campaigns of the last three Republican presidents, said that with the rise of the Tea Party, it’s become more difficult in recent years to walk the line between courting Hispanic voters while appeasing the “very, very conservative elements” of the party on immigration.

If the price of “courting Hispanics” is to provide amnesty for law breakers, then the price is too high. Particularly since, from all appearances, most will be Democrat Party voters. The mechanisms for securing the border seem weak and politically charged, and what we will see is mostly a token measure. And then we get more ObamaCare styled portions. Here’s the part about getting tax money out of illegals

(Politico[3]) They chose the milder approach and punted the details to the Treasury Department and IRS to hash out down the road.

“Getting back taxes is incredibly difficult, particularly when someone has paid into a fraudulent Social Security number,” Sen. Jeff Flake (R-Ariz.), a member of the gang, told POLITICO. “You might have a case where the government owes more back than it gets in. So I don’t know. We’ll leave that up to the IRS to figure how we do it.”

Punting on the issue puts the details in the hands of the experts, but it also means leaving a big question mark until after the bill is enacted.

This is the same thing they did with ObamaCare, namely, directing federal agencies to Do Something, leaving the details up to those agencies, rather than actually writing hard law. Which, much like ObamaCare, has created many unintended consequences and given the agencies, filled with hard left Progressives, the ability to make it up as they see fit. How much will the IRS spend to collect this money? Knowing the way the government works, they’ll probably spend more than they collect. If they bother trying.

Rubio may not be “cranky old John McCain”, but that matters little to Conservatives, who tend to look more at substance than flash. He’s putting his “compassion” for illegals over the rule of law, and if he thinks Conservatives are going to buy this legislation, he’s got another thing coming. Conservatives turned on Bush 43 when he pushed shamnesty and will do the same with Rubio.