Looks like getting Boehner’s chair[1] is not going to be the cakewalk that Kevin McCarthy imagined it to be after all. He’s got two viable contenders: Daniel Webster of Florida and Jason Chaffetz of Utah. My money’s on Webster. Voting for McCarthy would be a vote for Boehner and Tea Party conservatives just can’t stomach that anymore. We need to clean house literally here. But look for McCarthy to play games and make deals. He’ll offer his old seat to Jordan and we’ll see how that goes. McCarthy may get the floor vote (he shouldn’t, but he’s expected to), but the real test will be the public roll call. Constituents are closely watching what their representatives are doing and how they vote. If they value their own hides, they’ll vote against McCarthy and do the right thing. If they feel they can’t be touched and the 30 pieces of silver offered to them by the RINOs is just too tempting, then they’ll roll over for McCarthy. Time to choose freedom or your pocketbooks boys and girls. Choose carefully. 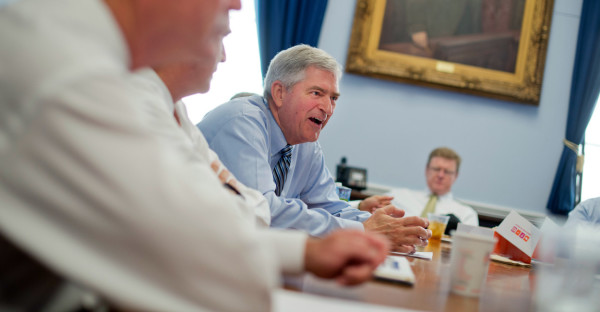 The conservative House Freedom Caucus on Wednesday endorsed little-known Rep. Daniel Webster (R-Fla.) for Speaker — a bold move that raises serious doubts about whether Majority Leader Kevin McCarthy can cobble together the 218 votes on the House floor he needs to be promoted.

McCarthy, a five-term California Republican, is expected to easily win the nomination when House Republicans huddle at noon Thursday to pick a successor to outgoing Speaker John Boehner (R-Ohio).

But the true test will come Oct. 29, when the House holds a public roll call vote to formally elect the next Speaker.

The Freedom Caucus, led by Chairman Jim Jordan (R-Ohio), holds enough votes to essentially veto a McCarthy Speakership, though it’s unclear whether all members would cast their ballots the same way.

No one can be elected Speaker unless they win 218 votes.

“I think he’s over the 200 hump, but that’s not the hump,” said Rep. Lynn Westmoreland (R-Ga.), a McCarthy backer who acknowledged the leader still has a steep climb.

Webster, 66, the soft-spoken former Speaker of the Florida House, is a long shot to win the Speaker’s gavel, as is another rival, Oversight Committee Chairman Jason Chaffetz (R-Utah), 48, who jumped in the race last weekend.

But combined, Webster and Chaffetz easily could siphon more than 30 GOP votes from McCarthy on the House floor, denying him the Speaker’s gavel and sending the process into multiple rounds of voting.

And the endorsement of Webster signals the influential 40-plus member Freedom Caucus’s intention to draw out the process and force McCarthy’s hand.

“Under the present circumstances and without significant changes to Conference leadership and process, Rep. Daniel Webster would be best equipped to earn back the trust of the American people as Speaker of the House,” the group said in a joint statement.

Rep. Mick Mulvaney (R-S.C.), a Freedom Caucus member, said the endorsement is for Thursday’s vote and not for the floor vote.

Still, he said the group has proven that “once we walk out of that room united, we stay united on the floor.”

With the math working against McCarthy, some conservative leaders are reviving the idea of brokering a deal and forging a coalition with the GOP leader: A bloc of conservatives would throw their support to McCarthy on the House floor, pushing him over 218. In return, McCarthy would back one of the conservatives, such as Jordan, to replace him as majority leader.

“Getting a majority of the conference for Speaker is not the answer. He’s got to get to 218 on the floor,” said one leader of the Freedom Caucus, which had pressured Boehner to resign. “There is speculation among many that the only way that Kevin McCarthy ever gets 218 on the floor is if there are different people in leadership.”

Mulvaney called the idea of a conservative coalition with McCarthy “something that is still on the table.”

McCarthy allies are urging their colleagues to unify around whomever emerges from Thursday’s vote on the House floor. “If you’re going to be a member of the conference, you ought to support the conference nominee,” said Rep. Tom Cole (R-Okla.), a McCarthy supporter and former member of leadership.

But the public roll call, where lawmakers will have to shout out the name of their candidate for Speaker on live TV, is sure to create headaches for many Republicans. Twenty-five voted against Boehner for Speaker in January.

And conservatives inside and outside of the Capitol are trying to suggest that a vote for McCarthy is another vote for Boehner, a creature of Washington who’s despised by the base. The Tea Party-aligned FreedomWorks is blasting McCarthy as “Boehner 2.0.”

Rep. Thomas Massie (R-Ky.), who is backing Webster, predicted more Republicans would vote for McCarthy in Thursday’s internal election rather than on the House floor.

“This is like the Boehner vote part two. You want to go home and tell your constituents you voted for Boehner’s right-hand man?” Massie said. “It’s easier to do that in a private, secret ballot behind closed doors than in public.”

Even some natural leadership allies such as Rep. Renee Ellmers (R-N.C.) expressed doubts about promoting McCarthy to Speaker, a job second in line to the presidency.

“He has not spoken to me personally for my vote, and Jason Chaffetz has, so that’s where I am right now. At this point I will be casting a vote for Jason Chaffetz,” said Ellmers, who is facing a GOP primary challenger. “I can’t vote for someone who doesn’t ask for my vote.

“I’m apparently not high on his priority list,” she added.

Rep. Raúl Labrador (R-Idaho), a founding member of the Freedom Caucus, said the group’s best shot at influencing the races at this point is by banding together.

“That’s really our strength right now, is working together as a group,” said Labrador, whom McCarthy handily defeated in the race to succeed Majority Leader Eric Cantor (R-Va.), who unexpectedly lost his 2014 primary. “And I’ll be honest, I don’t know if any of our leading members could be elected right now.”

The conservatives will need to stand tough together to pull this off. I hope and pray they do for all our sake’s this time. McCarthy is an elitist who can’t be bothered with even talking to his colleagues for support evidently. Big mistake. The Freedom Caucus, credited with helping push out Speaker John Boehner, has 40 or so members and effectively has veto power in the election of a new speaker of the House. Rep. Mick Mulvaney, R-SC, told The Daily Signal[3] in an interview that at least 80 percent of Freedom Caucus members agreed to vote for Webster on Thursday, when the House Republican Conference will pick its nominee for speaker in a secret ballot. It isn’t just hard-line conservatives who don’t care for McCarthy. Moderates aren’t crazy about him and his support is not nearly as strong as he thinks it is. It should be a nail-biting process. For a party that is on the verge of collapsing, the outcome is killer.