Following the speech, the Judge took time to respond to the Washington Post, which is currently engaging in an all out attack on Moore, including giving media time to a woman who claims Moore was sexually inappropriate with her when she was 14 and he was 33. Of course a cursory examination of her story shows a number of holes including the fact that her timing is off and she’s a Hillary supporter who has worked for her campaign. So, the veracity of her claims is under scrutiny. But Moore himself puts it best in his post speech commentary.

“Now I want to address something that some people have come here to hear about. Shortly after becoming the Republican nominee for the United States Senate, the Washington Post began an attack on the Foundation for Moral Law, on my wife, and on me. For weeks, we read about my salary which they distorted, about taxes where they said we were paid money we never got. But we endured that.”

He continued, “Later, they came out and endorsed my opponent in this race. Just two days ago, the Washington Post published yet another attack on my character and reputation in a desperate attempt to stop my political campaign for the United States Senate. These attacks about a minor are completely false and untrue about something that happened nearly 40 years ago. But more than being completely false and untrue, they are very hurtful to me personally.” 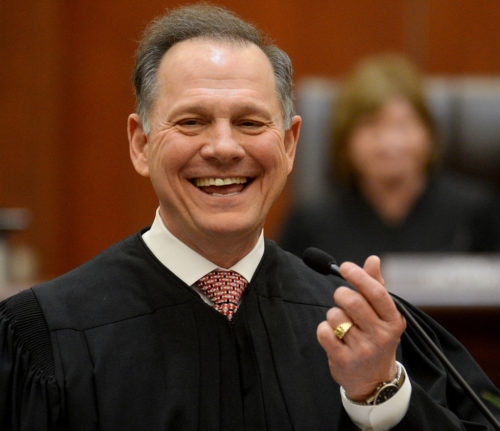 “I’ve been married to my wife Kayla for nearly 33 years. We have four children. I have one daughter, and I have five granddaughters. I have the highest regard for the protection of young children. When I returned to Gadsen 40 years ago after military service, I went to work for the office of the District Attorney. As a student of the law, I have served in public office off and on for the last 40 years. To be attacked for allegations of sexual misconduct contradicts my entire career in law.”

Moore went on, “I wanted to make it clear to the media present and the people present, I have not provided alcoholic beverages—beer or anything else—to a minor. I have not been guilty of sexual misconduct with anyone. These allegations came only four and a half weeks before the general election on Dec. 12. Why now?”

It was then that the crowd rose to their feet and gave him a standing ovation.

“My opponent is 11 points behind—that came out just days before this article. They’re desperate. This article is a prime example of fake news, an attempt to divert attention from the true issues that face our country like healthcare, military readiness, tax reform, immigration, and the national debt. We do not intend to let the Democrats or the establishment Republicans or anybody else behind this story stop this campaign. There are investigations going on. In the next few days, there will be revelations about the motivations and the content of this article. They will be brought to the public. We fully expect the people of Alabama to see through this charade and to vote in the [election] coming up.”

“As Mr. Armistead said, we do not engage in negative campaigning. We haven’t, and I’ve been blistered with articles and attacks the last two to three months and on television. I do not expect the Washington Post to stop. I think they have a political agenda. And I think they are running that agenda, and everybody in this room and every person watching on these cameras should ask themselves that isn’t it strange that after 40 years of constant investigation these people have waited until four weeks prior to the general election to bring their complaints? It’s not a coincidence. It’s an intentional act to stop my campaign. May God bless you, the state of Alabama, and the United States of America.”

Indeed Judge Moore’s entire legal career has been one of honoring his oath, honoring the people of Alabama and honoring God. And it is these facts which infuriate the Left. Judge Moore is hated on the Left, ever since he battled them to keep the Ten Commandments in the courthouse. And now, he is also hated by the GOP establishment just as virulently because he is a no nonsense Conservative, not a wishy washy milquetoast Liberal in disguise like so many Senate Republicans.

Judge Roy Moore is a man of honor. And he will make a great Senator despite the attempts of the Left to damage his campaign and his character. He lives by God’s word, so we will end with this passage from Isaiah 54.

“But in that coming day no weapon turned against you will succeed. You will silence every voice raised up to accuse you. These benefits are enjoyed by the servants of the Lord; their vindication will come from me. I, the Lord, have spoken!”

Godspeed Judge Moore. May your accusers be silenced.