POWERFUL! The Speech Gowdy Just Delivered On House Floor Has EVERYONE In Tears! [VIDEO]

Trey Gowdy moved me to tears[1] over this. May 15th was “Peace Officers Memorial Day.” Gowdy took to the House floor to honor police officers and to reflect on the fact that no call is just routine. Not only do the officers on call put their lives on the line and never know what will happen, they are likely to be blamed if anything goes sideways at all. In the example Gowdy related, things certainly did go sideways and a good officer was caught in the middle and wound up hurting a child and regretting it the rest of his days.

The officer in question shot the perpetrator who had just shot his wife. The nut was taken into custody, but in doing so, a bullet hit a child they didn’t know was in the trailer behind the guy while the officers were returning fire. Officer Kevin Carper did nothing wrong, but he never got over that he accidentally shot a little girl. It tore him up inside. Gowdy told him he did the right thing. But it did not erase the pain and guilt of what he did in the line of duty. 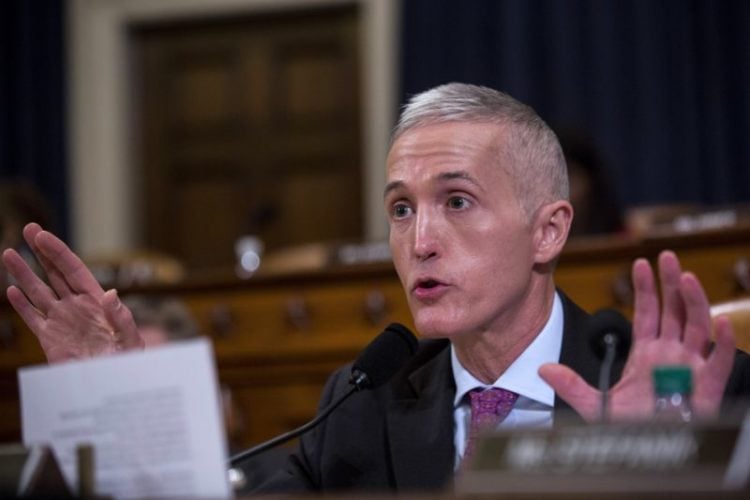 This week was National Police Week.

And May 15 was “Peace Officers Memorial Day.”

To honor fallen law enforcement officers, last night the White House was lit in blue. Thanks to all involved to make this happen. pic.twitter.com/X1TVKfGBgW[3]

Trump flew the White House flag at half-staff and spoke at a memorial service.

Quite the difference from the prior Obama administration, which sat down with anti-police groups like Black Lives Matter and seemed to call police actions into question as a matter of course.

The week has been a time to honor those who ‘serve and protect’ us day in and day out, and to recognize those who sometimes have to give the last full measure of devotion.

While estimates vary on percentages, there is no question that law enforcement deaths are up, with a despicable rise in ambush killings.

But perhaps, nothing sums up the job and the sacrifice more than the life of Officer Kevin Carper as told by Rep. Trey Gowdy (R-SC).

Gowdy wept as he related this officer’s story. The wife-killer was found guilty because the officer testified about that event. Gowdy wanted to thank Officer Carper because he restored his faith in the law. He never got the chance. Carper was shot to death shortly after that at a routine traffic stop by a guy who had been arrested 30 times before. The same officer who saved lives and never forgave himself for hurting an innocent child, was taken from this world by another monster.

The funeral was well attended and the final radio call broke everyone’s heart… in the end, Carper was cleared to go home. A good man is gone and many, many people never realize just how noble being a police officer is. How self-sacrificing and dangerous… how thankless and stressful it is. Our police are the best among us and Trey Gowdy painted that picture perfectly. He won’t get to be the head of the FBI… but Gowdy should be. And this is one of the many reasons why.