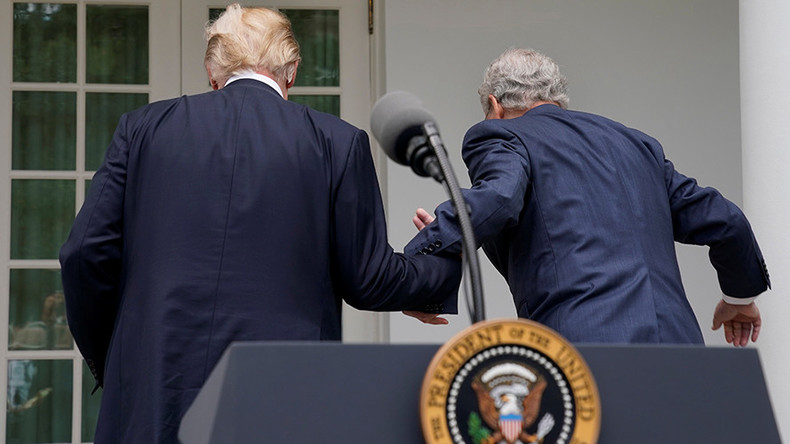 Left wingers are too busy making jokes about homosexuality to understand Trump’s actions.

Yesterday, President Trump and Senate Majority Leader Mitch McConnell gave a press conference at the White House’s Rose Garden. After they finished speaking to the crowd, they both turned to head back to the White House. In walking up the few stairs back into the building, Trump quietly and obviously grabbed McConnell’s hand as they both went up the stairs.

Twitter went nuts with one CNN reporter saying, “That hand-lock between Trump and McConnell, though,” with many people responding with gay themed and drag queen gifs to make jokes about how Trump is obviously gay for McConnell. Most of the flippant comments on the display are unaware that childhood polio used to actually happen and they had even less notion that Mitch McConnell himself had polio when he was younger, impacting his mobility. Trump at 71 helped McConnell at 75 up the stairs because that’s what a decent person does for someone with a disability.

Twitter replies pointed out that CNN’s Diaz was “probably too young to realize that people used to get polio in this country” and others chimed in to call her a “tacky” and “insensitive” woman.

You are probably too young to realize that people used to get polio in this country. Childhood polio isn't funny.

Tacky woman. How dare you be so insensitive. #disgracefulldem[5] POTUS is a man of compassion; you not so much.

Capitol Hill reporter Manu Raju knew that McConnell had suffered polio as a child and helpfully explained it:

McConnell is a polio survivor, a reason why stairs can be tricky at times

But still, the left kept up their confusion, with Matt Berman, a deputy editor from Buzzfeed wondering what happened to cause two grown men to touch hands. You know, for a political group that claims that 10% of the population is gay and that men getting married to other men is normal, they sure are disturbed when they see two straight men hold hands briefly.

One senior editor for The Daily Beast, Andrew Kirell, has already tweeted his comment on the action before others chimed in to call him out on it:

okay McConnell had polio as a kid and isn't super steady at all times.

You’re the senior editor of a political publication but don’t know they McConnell’s childhood polio now makes stairs difficult for him?

McConnell was diagnosed with polio when he was two years-old. In 1990, he said that his family “almost went broke” in 1944 when they took him to be treated at the Warm Springs Institute in Georgia. He attempted to join the U.S. Army Reserve in Kentucky in 1967, but after five weeks of training, he was honorably discharged for medical reasons.

Trump and McConnell have been at each other’s political throats lately, with Trump choosing to work with Democrats to get his mandate across and with several GOP and Tea Party groups demanding that McConnell step down as the Senate Majority Leader[15].