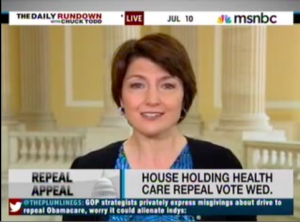 Romney needs a solid conservative running mate on the Republican ticket. : In 2012, we have more solid VP names being talked about lately. : Bobby Jindal, Chris Christie, Marco Rubio, Rob Portman, Bob McDonnell and others have been mentioned would be superb choices. : However, I do agree with the Wall Street Journal, in the case of Christie, that two Northeastern governors on the ticket won’t sit well with the base[2].

Rep. Allen West is a fighter and I would be happy to see him be chosen to be our next VP. However, Marco Rubio was heavily favored to be our candidate as indicated by: conservatives at the last CPAC straw poll[3]. :  Although, while many in the party are clamoring for Marco Rubio due to the increasing influence of the Hispanic vote in American politics, we should remember that: he hasn’t been tested on the national stag[4]e. : Additionally,: as George Will astutely pointed out[5], “according to exit polls, Nevada’s Hispanic Gov. Brian Sandoval, a Republican, won only about a third of the Hispanic vote in 2010.”: : Will continues by stating that in the last 10 of 16 presidential contests since World War II saw the running mate of nominated candidate failing to carry his/her state for the ticket in the general election.

Hence, why the “veepstakes” is a non-issue, however, with Romney, who is of the more moderate vein, it matters more since keeping the base “excited” about him is key come November.

However, with all the talk of Condi and the perils of 2008, I think it’s unfair to cast Palin as the death knell in considering female candidates for VP. : I still feel we should look more closely at a woman for the number two spot this year. We all know conservative women. They’re tough. Hence, why I think the gentlelady from Washington State would be a good choice for Mitt Romney.

Cathy McMorris Rodgers[6]: is a Republican congresswoman from the eastern part of Washington State.: She is a political professional: [7]who is serving her second term as Vice Chair for the Republican Conference, which makes her the most powerful Republican woman on the Hill. She is the first to attend college within her family, earn her MBA, and become a State House Member at the age of twenty-four.:  In all, she is the definition of ambition.

A common sentiment communicated to Roll Call in background and off-the-record conversations is that McMorris Rodgers offers appeal to female voters, and, because of her background, to blue-collar voters. …

McMorris Rodgers is one of at least three top female candidates Romney’s team could consider, with the others being New Mexico Gov. Susana Martinez and New Hampshire Sen.: Kelly Ayotte[10].

Neither Martinez nor Ayotte have spent much time in front of the public eye, which a GOP leadership aide said could lead to problems: “Exhibit A: Sarah Palin.”

She is vocal on the issue of Down Syndrome in America since her first son, Cole ,was diagnosed : in 2007.:  In fact, she is the only member of Congress in decades to give birth while in office not just once, but twice.:  She has amassed political influence behind the scenes and her low profile might be an asset according to Will Rahn’s column for the Daily Caller. In addition,: she also has solid conservative credentials being a fighter on bailouts, earmarks, and Obamacare[12].:  Congresswoman Rodger’s experience, diction, and appeal could help us in the general election. : She is a capable leader and a solid conservative who could animate the base and balance the 2012 ticket in what turned out to be a disappointing Republican primary race between two top tier candidates who had shoddy conservative credentials. : Romney : shouldn’t make the mistake of overlooking Congresswoman Rodgers. : Romney/Rodgers 2012!