‘Republican’ Congress Who Will Pass New Gun Laws But NOT Repeal Obamacare – Are They Republican At All? [VIDEO]

I don’t know about you, but it’s getting harder and harder for me to tell the difference between Democrats and Republicans. The feckless GOP is now signaling they are possibly willing to ban bump stocks. They know damn well that is a slippery slope and the left is salivating over it. These are the same weak, corrupt politicians who caved on Obamacare. New details on the gun legislation put forth by commie Diane Feinstein are surfacing and they are not pretty. Worse yet, it appears the NRA may dance with this. Never let an emergency go to waste, especially if a lot of dead Americans are involved.

Feinstein is the one who admitted in the 1990s that she wanted American gun owners to “turn them all in.” She’s now written a bill that would in effect turn millions of Americans into felons overnight. It’s called the Automatic Gun Fire Prevention Act. It bans any accessory that could possibly be construed to help someone fire an AR-15 quickly. Uh no… that won’t fly. “It shall be unlawful for any person to import, sell, manufacture, transfer, or possess, in or affecting interstate or foreign commerce, a trigger crank, a bump-fire device, or any part, combination of parts, component, device, attachment, or accessory that is designed or functions to accelerate the rate of fire of a semi-automatic rifle but not convert the semi-automatic rifle into a machine gun.” 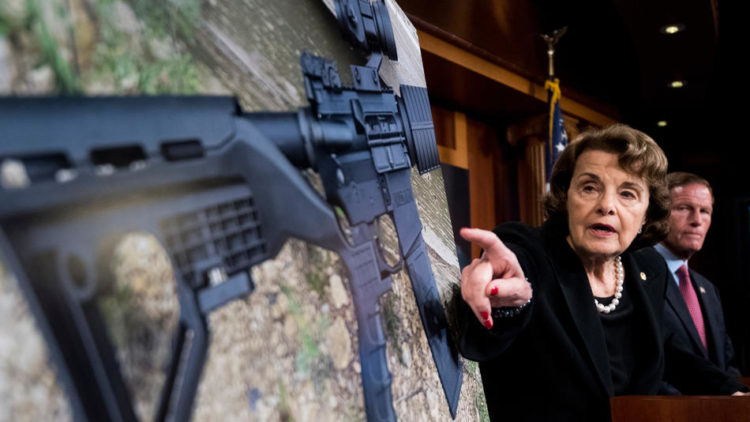 The fact that the NRA and Republicans are even willing to discuss this is extremely worrying. Millions of Americans are now fearing for their gun rights under a Republican President. We would never have dreamed that possible. Feinstein is not going after things that modify a gun’s rate of fire and she admits that. Her bill bans anything that helps a rifle fire quickly. That would indicate and cover every single accessory on the market. Replacing a spring or lightening a trigger for competition would be instantaneous felonies, punishable by up to 10 years in prison. There are even now experts who worry that because a magazine size determines how quickly a gun can fire, this could also be constured to ban ‘high capacity magazines’.

This my friends, is a very thinly disguised Assault Weapons Ban. The Republicans need to shoot this down and fast (no pun intended). It just signed on its 33rd co-sponsor and I’m even hearing some Republicans come out in support of it. This is not what we elected Republicans to do. If they vote this way, they are betraying the American people and the Constitution. If this bill goes through with Republican support, the American people will turn on ALL of the Republicans and the feces will hit the fan. They might want to consider that before they crawl into bed with gun-banning communists.

The legislation would give the ATF the authority to ban any type of accessory they want, as long as they can argue that it contributes to helping a shooter fire quickly. And if those accessories just happen to be on every rifle, such as a pistol grip or a handguard, then we are all screwed. This is an absolute assault on the Second Amendment and our rights. We don’t know why the Vegas shooter shot and killed 58 people, but we do know the wolves of the left were just waiting for an event like this. This bill goes after every single AR-15 and rifle owner in the entire country.

It’s not just the “RINOs” either. Florida Senator Marco Rubio said this week he would “always be open” to passing gun control. Rep. Mark Meadows – the conservative head of the Freedom Caucus – told reporters he would be “open to considering a bill.” If a gun ban reaches the floor, Wisconsin Senator Ron Johnson admitted on camera that he “would vote for it.” Texas Senator John Cornyn said that holding a hearing on banning AR-15 accessories would definitely be “worthwhile.” And when asked whether he would let such a bill come to the floor, Paul Ryan said that this is “clearly” something Congress should look into. These are Republicans for God’s sake who are eager to sell our rights out from underneath us. All in all we have counted at least three dozen Republicans who would entertain jumping on board with Feinstein’s gun ban and those are just the ones who admitted they’re open to it.

We cannot allow this to happen. If the Second Amendment falls, the rest will quickly follow suit. We will either stand as a Republic or fall and all of it hinges right now on this gun ban. There is no coming back from this if it passes. There is no do-over here. Will you stand and fight for your right to be armed? I know I will.