Republican Coup In The Works: Boehner To Lose Speakership If He Pushes Amnesty

No matter how little political sense it made, how much blowback he took from the base and how much it distracted people from Obamacare, John Boehner has been determined to push amnesty. However, yesterday he suddenly changed his mind. What could have forced him to reverse course? It turns out that if Boehner insists on amnesty, he’ll face a coup[1]. 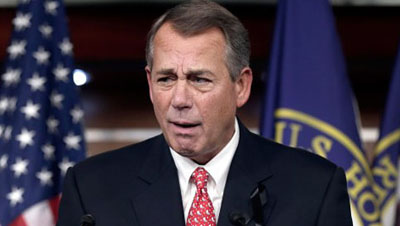 “I think it should cost him his speakership,” Mr. Labrador, Idaho Republican, said in an interview with the Capitol Hill news organization.

Mr. Labrador also refused to rule out running to replace Mr. Boehner – even if the Ohio Republican put the brakes on immigration bills.

“There is a hunger in the conference for bold, visionary leaders, and this is not just conservatives – you talk to more middle-of-the-road members of the conference, they’re kind of frustrated with the direction of this leadership, and they’re looking for ways to change that,” he told CQ Roll Call.

Mr. Boehner said Tuesday that he is not sure whether he will pursue immigration bills this year, days after House leaders outlined their principles at an annual GOP retreat that included border security and legalization for most illegal immigrants. The plan also included a specific new pathway for younger illegal immigrants.

John Boehner is charisma-free, an awful strategist, hostile to the Tea Party, and he has a reputation for folding in every negotiation. He has long since outlived his usefulness as the Speaker of the House and it’s time for him to go. The sooner that happens, the better, whether he pushes amnesty or not.