Everyone acts soooo shocked that Kayla Moore is standing by her husband, Judge Roy Moore. I don’t know why. I’m convinced he did nothing wrong and so is his wife of 33 years. In an interview with OANN yesterday, she hotly defended her husband with everything she had. She also discussed his Alabama U.S. Senate race against Democrat Doug Jones. For legal reasons, she declined to discuss allegations that her husband engaged in inappropriate behavior or sexual misconduct in the late 1970s and early 1980s. She has contended he was innocent from the very beginning and that has not changed. “They’re allegations and I don’t want to talk about allegations,” Moore said.

Kayla also echoed her husband in his calls for Senate Majority Leader Mitch McConnell (R-KY) to step down. I agree, that RINO slug should have been gone long ago. He has a special hatred for Moore. He has spent millions trying to keep Moore out of the Senate. Now, he is threatening if Moore is elected, that as soon as he is seated, he will have him removed by an ethics investigation. Who the bloody hell does Mitch McConnell think he is? The people of Alabama will decide this race and it is not his place to pass judgement on Moore. Who I contend is innocent, which is way more than you can say for McConnell. 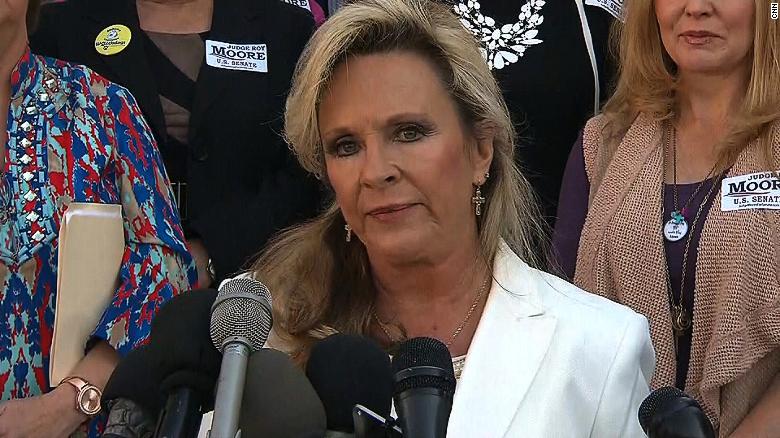 “That he needs to step down,” Kayla said. “Because he is not a leader and he’s not doing his job. And the people are tired of Washington not doing its job and not representing the people of Alabama and playing a game.” If Congress is the DC swamp, then McConnell is the head swamp creature and needs to go and stay gone. He’s petty and corrupt. He accomplishes next to nothing, except lining his own pockets and playing at being some kind of kingpin.

In that same interview, Kayla touted her husband’s character and love for America. “That he’s honest and that he’s godly and that he loves his country,” she said. “He fought for his country in Vietnam. As I said in my speech earlier today, he’s an officer and a gentleman. And you can always count on him to tell the truth.” She’s a heck of a wife and I for one, hope and pray that Moore wins his race. Shame on all of those on both sides of the aisle that wanted to burn him at the stake without credible proof.

OANN Trey Yingst closed his interview with Moore by asking her if her husband had been “completely honest” in his statements about the “allegations.” “As I said, he always tells the truth,” she said. Which is more than you can say for the Washington Post, the left, his coerced accusers and some on the right. Innocent until proven guilty… that’s the American way.