In a long article, the Washington Times[1] discusses how Marco Rubio’s future is tied to the success of the amnesty bill, having been the face of this malarkey. 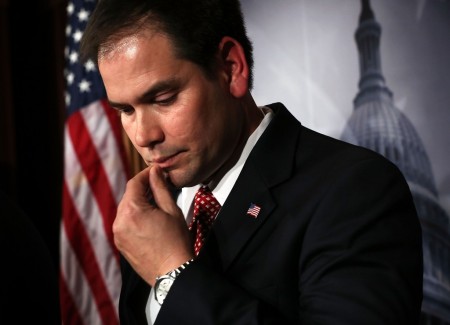 Sen. Marco Rubio was the glue that held together the immigration deal in the Senate, helping set the stage for adding tens of thousands of Border Patrol agents to the final deal – but failing to win many of the changes the Florida Republican himself said he needed to see.

The 68-32 vote last week in favor of the bill was a milestone for the Senate and for the immigration debate, but it was even more important for the first-term senator whose political future is inextricably linked with the landmark legislation he helped write and pass.

“I think the debate has been hard for Marco. It’s been a physical strain, an emotional strain, a political strain. Without a doubt, this has not been peaches and cream for Marco,” said Ana Navarro, a Republican Party strategist from Florida and a Rubio ally.

“But I actually think his political stock has gone way up in the sense that he’s achieved something – he’s gotten a major legislative accomplishment under his belt and he’s made a difference in this debate,” she said. “So you now can’t say he’s the Republican Barack Obama – a first-term senator who made great speeches. This guy now can say he was a crucial part of getting a very controversial piece of bipartisan legislation through.”

This is where the huge breakdown between GOP insiders and the people who actually vote Republican, especially Conservatives, occurs. This bill is about as popular with Republican voters as a turd is in a punch bowl at a wedding. If the amnesty bill passes the House and is signed into law, Rubio loses. If the bill fails the House, Rubio loses. And what was so hard for Marco? All the distortions, misrepresentations, and out-right lies? Or was it the pretending to be a Republican while pushing a bill that’s really popular with Democrats and helps out the fortunes of Democrats?

Responding to his critics, Mr. Rubio delivered a broad floor speech Wednesday saying he got involved in writing the bill because it otherwise wouldn’t have any provisions for border security. He also said the final deal is better than current law, which isn’t being enforced at all.

It still doesn’t have any hard border security provisions written in as “thou shalt do”. Almost all can be blown off the head of DHS, and the border agent surge doesn’t occur for nearly half a decade. Legalization comes immediately.

Mr. Rubio called the English-language loophole “one of the bill’s shortcomings” and vowed to fix it, and even wrote an amendment to require immigrants to prove English skills, rather than merely sign up for classes, which under the bill is considered acceptable.

Debate was virtually non-existent, despite another Rubio promise to have a long debate about this issue.

Michael McKenna, a Republican strategist with deep ties to Capitol Hill, predicted there will be more praise like that for Mr. Rubio – but that it won’t help him when it comes to winning over primary voters.

“He’s instantly the Democrats’ favorite Republican to win the nomination in 2016. The media and the Democratic establishment are going to love him and try to convince us all that he’s really the answer to the problems that plague the Republican Party. I suspect the Republicans are going to have a significantly different take on it,” Mr. McKenna said. “He’s a young man who once had a bright and promising political future. He’s instantly the Brazil of American politics.”

This is Rubio’s bill, no matter what happens. The question is, will he be punished for it? Will Republicans and Conservatives remember this come 2016, when he’s up for re-election, and may possibly run for president, and say “nope. No money or support for you”?