Surprise, surprise, surprise![1] You hear that? Those are the whispers from the GOP that Donald Trump, may… just may, be here to stay and may take the nomination. Rules put in place after Romney’s last catastrophic run may actually help Donald Trump secure the party’s nomination. Regardless of the propaganda out there, Trump is far and away leading the field by double digits. No one even comes close. If he keeps this up, there will be no stopping him from stealing the show. A growing number of beltway insiders are now grudgingly admitting they have been defeated by Trump and America. Mostly due to voters being genuinely pissed off at the crappy, ineffective, incompetent manner in which they have handled every issue out there. Oh, and the overwhelming corruption they flaunt on a daily basis. 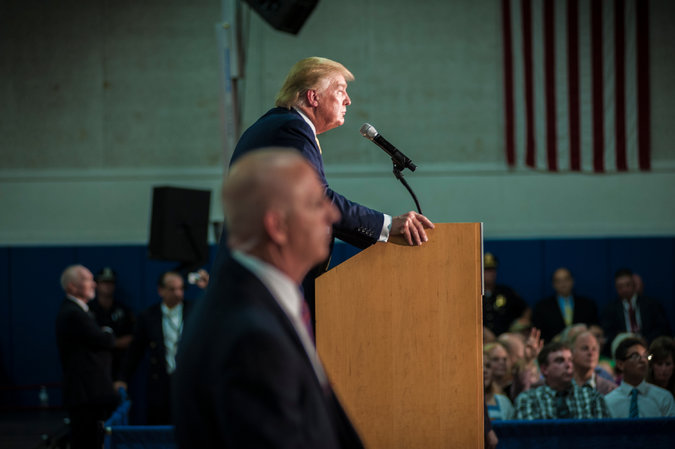 LOS ANGELES — When gloomy Republican Party leaders regrouped after President Obama’s 2012 re-election, they were intent on enhancing the party’s chances of winning back the White House. The result: new rules to head off a prolonged and divisive nomination fight, and to make certain the Republican standard-bearer is not pulled too far to the right before Election Day.

But as the sprawling class of 2016 Republican presidential candidates tumbled out of their chaotic second debate last week, it was increasingly clear that those rule changes — from limiting the number of debates to adjusting how delegates are allocated — had failed to bring to the nominating process the order and speed that party leaders had craved.

In interviews, Republican leaders and strategists said that rather than having a presumptive nominee by early 2016, who could turn to the tasks of raising money and making the case against the Democratic candidates, it was doubtful that a candidate would be in place before late spring — or even before Republicans gather for their convention in Cleveland in July.

And they said they were increasingly convinced that Donald J. Trump could exploit openings created by the party’s revised rules to capture the nomination or, short of that, to amass enough delegates to be a power broker at the convention.

“You’ve got a set of unintended consequences that weren’t planned for,” said Richard F. Hohlt, a Republican donor and Washington lobbyist. “So it’s going to be harder for a candidate to get to the magic number, which could open up the process to a convention situation.”

To some extent, this reflects forces beyond the party’s control. Conservative activists have shown little appetite for Republicans who play by traditional rules. They, and the right-tilting candidates they are supporting, may be in even less of a mood to acquiesce at a time when Republican leaders in Washington, despite controlling both houses in Congress, have been unable to stop or even slow Mr. Obama’s nuclear accord with Iran, and are struggling in their bid to deny funding to Planned Parenthood.

But the evolving Republican landscape also suggests that the party’s changes, like squeezing primaries into a shorter period in hopes that one candidate would break through, are proving no match for a field this big and rambunctious, powered by the forces of populism and anger at Washington, and financed by wealthy benefactors.

In the starkest sign of how unsettled the situation is, what once seemed unthinkable — that Mr. Trump could win the Republican nomination — is being treated by many within the Republican establishment as a serious possibility. And one reason his candidacy seems strong is a change by the party in hopes of ending the process earlier: making it possible for states to hold contests in which the winner receives all the delegates, rather than a share based on the vote, starting March 15, two weeks earlier than in the last cycle. Ten states have said they will do so.

If Mr. Trump draws one-third of the Republican primary vote, as recent polls suggest he will, that could be enough to win in a crowded field. After March 15, he could begin amassing all the delegates in a given state even if he carried it with only a third of the vote. And the later it gets, the harder it becomes for a lead in delegates to be overcome, with fewer state contests remaining in which trailing candidates can attempt comebacks.

“Somebody like Trump, who is operating in a crowded field, could put this contest away early if the crowd doesn’t thin out,” said Eric Fehrnstrom, who was a senior adviser to Mr. Romney.

Steve Schmidt, a senior adviser to Senator John McCain of Arizona when he ran for president in 2008, said Mr. Trump could also be helped by the fact that candidates like Ben Carson and Carly Fiorina, with thinner financial resources and therefore likelier to run out of money, are, like Mr. Trump, political outsiders. So their supporters would be more inclined to fall in behind Mr. Trump than, say, Mr. Bush or Senator Marco Rubio of Florida.

“There is a bubble of delusion among Republicans and Democrats in Washington, D.C., with regard to their parties’ respective nominating processes,” Mr. Schmidt said. “There is no magic date upon which the air will come out of the Donald Trump balloon. The notion that Donald Trump cannot be the Republican nominee is completely and totally wrong.”

The Republican rule changes reflected the lessons learned from Mr. Romney’s defeat, after a long primary fight left him short of money and pulled to the right on issues, weakening him among undecided voters when he faced Mr. Obama. The party compressed its nominating calendar to try to make the process end sooner, limited the number of debates, moved the convention to July from August, barred all but the traditional early nominating states from holding contests until March and shortened the period in which states could hold primaries or caucuses that award delegates proportionally.

But this was a remedy for a very different campaign from the one now being waged. With 15 candidates in the field, and Mr. Trump at the center of the action, the debates have become ratings bonanzas for the networks and drawn record-setting viewership. And many states, eager to play a more influential role, seized the opportunity to schedule their nominating contests earlier. Eight states in the conservative-dominated South, where insurgent candidates like Mr. Trump could do well, have created a Super Tuesday on March 1, when delegates must still be awarded proportionally.

It also represents a grudging concession that Mr. Trump may not fade from the scene — and that even if he ultimately loses, he is likely to have enough delegates to be a force at the convention.

The RINOs just can’t believe what is happening. They were supposed to be in control of this process until Trump snatched it out from underneath them. It has been a blast to watch and we have a long ways to go yet. I predict that Graham, Pataki, Walker, Jindal, Christie, Santorum, Paul, Kasich and Gilmore are on their way out the door as I write this. Huckabee may not be far behind that. Jeb Bush should drop out… but he is the establishment darling and will cling to the bitter end. Fiorina and Rubio will bow out later in the game. That leaves Trump, Cruz and Carson. Right now, all the money is on Trump. We’ll see the lay of the land as we go. In the end, we may see a Trump/Cruz ticket and I would be fine with that. Poor Karl Rove is about to have an embolism over all this. Good times.