Rumble in the GOP! National Review Goes AGAINST TRUMP; Gets Dis-Invited from GOP Debate

When I first heard about this[1], I cringed. Simply because I thought it was a violation of free speech. Not exactly. National Review and 22 conservative authors have penned an anti-Trump manifesto for National Review. I have never seen anything like it in my lifetime. Afterwards, the GOP dis-invited National Review as a moderator at the next debate. They cited that a moderator cannot have a predisposition. I would agree with that. My only caveat is some of the previous moderators have certainly been ‘predisposed.’ Not as high profile as this, I’ll give you that. I would never have dreamed that the GOP would dump National Review, but they did. 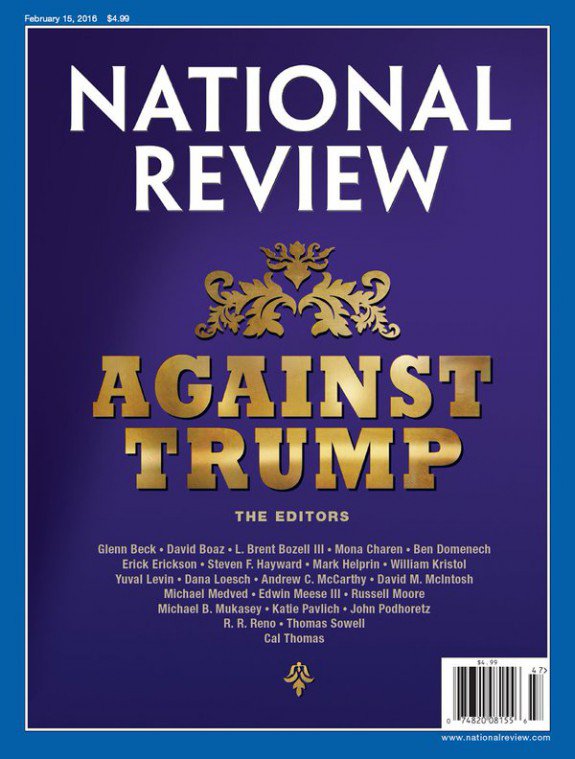 National Review publisher Jack Fowler indicated Thursday night that he was not surprised[4] by the revocation of the invite.

“Tonight, a top official with the RNC called me to say that National Review was being disinvited. The reason: Our “Against Trump“ editorial and symposium. We expected this was coming. Small price to pay for speaking the truth about The Donald,” Fowler wrote.

The move comes after the RNC cut NBC as a debate sponsor which now leaves CNN, Salem Media and Telemundo as the debate’s sponsors, according to Fox News.

In a special Friday edition of “National Review,” the country’s oldest and most influential magazine of conservative thought, conservatives such as RedState’s Erick Erickson and “The Weekly Standard’s” William Kristol penned essays indicating why they are “Against Trump,” the issue’s title. Among the authors[5] writing on this for National Review are quite a few names you will recognize[6]:

The move comes after the RNC cut NBC as a debate sponsor which now leaves CNN, Salem Media and Telemundo as the debate’s sponsors, according to Fox News. Jack Fowler blasted the GOP on Twitter over this and the rumble in the GOP is getting louder by the day. Fowler viciously swatted back at Trump supporters and was very snarky. “Donald Trump is a menace to American conservatism who would take the work of generations and trample it underfoot on behalf of a populism as heedless and crude as The Donald himself,” an editorial accompanying the essays in the issue says, according to The Hill[7]. It is unheard of for a party to attack their front runner in this manner. I guess we will have to see where this leads, but the rift in the GOP is growing and the divide may be uncrossable.