Literally on the day of the vote[1] that was predicted to swing McCarthy’s way, he suddenly dropped out of the race. I’m not one for gossip, but the whispers in DC are that McCarthy is having an affair with Renee Ellmers and has skeletons in his closet he doesn’t want brought out. These are very interesting developments and very dangerous times for the Republicans. The danger is splitting the vote and risking a Pelosi move. The vote has now been postponed. This is unheard of folks. One thing you don’t want when choosing the leadership of the House is intrigue and fracture. Between McCarthy’s Benghazi Committee snafu and the rumors of his illicit relationship with Ellmers, he just couldn’t go there. Now he says it’s not his time. And it never will be again. Word is they didn’t want to chance another Newt Gingrich kerfluffle. Boy… is there anyone left there that isn’t dirty or dancing on the wrong side of the sheets? 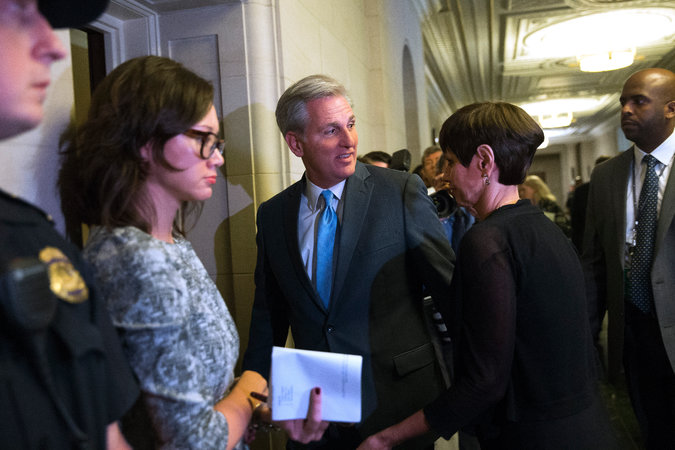 House Majority Leader Kevin McCarthy, the front-runner to replace John Boehner, stunned his Republican colleagues on Thursday by withdrawing from the race — a decision that will postpone the vote for speaker.

Fox News is told McCarthy simply said it was not his time. McCarthy faced opposition from some conservative members and groups, but was thought to have more than enough support to win the party’s nomination in the vote initially set for Thursday.

It’s unclear what specifically made McCarthy change his mind and drop out.

The shocking decision came shortly after House Republicans met to select their nominee for speaker. McCarthy was running against Reps. Jason Chaffetz, R-Utah, and Daniel Webster, R-Fla., before he dropped out.

He gave no indication of dropping out earlier in the day. “It’s going to go great,” McCarthy said Thursday morning.

Webster, though, has won favor with the conservative wing of the party. Wednesday evening, the House Freedom Caucus — with its 30-40 members — decided it would back Webster as a bloc.

Whoever ultimately is chosen by Republicans would need to muster an absolute majority, of roughly 218 members, to win in the full floor vote, which had been set for Oct. 29 originally.

The speaker’s race already has seen several curveballs since Boehner suddenly announced his retirement at the end of the month and McCarthy swiftly positioned himself as the presumptive next in line.

Shortly after announcing his candidacy, McCarthy was seen to stumble in a Fox News interview where he appeared to link Hillary Clinton’s dropping poll numbers to the congressional Benghazi committee. His comments fueled Democratic charges that the committee is merely political, which GOP leaders deny.

Amid the backlash over McCarthy’s Benghazi remarks, Chaffetz entered the leadership race over the weekend.

Republicans have nearly 250 members in the House and on paper have the numbers to win against the Democrats’ nominee, likely Nancy Pelosi. But if the winning Republican nomineecomes out with a tally short of 218, he or she will have to spend the next several weeks trying to rally support to get to that number.

In a curious development, Rep. Walter Jones, R-N.C., also sent a letter to House Republican Conference Chairwoman Cathy McMorris Rodgers, R-Wash., urging a full vetting of all leadership candidates to avoid a repeat of 1998, when the conference selected then-Rep. Bob Livingston in November to succeed outgoing House Speaker Newt Gingrich. It then emerged Livingston had been conducting an affair. Jones asked that any candidate who has committed “misdeeds” withdraw.

Asked by FoxNews.com to elaborate, Jones said he doesn’t “know anything” specific about any of the candidates, but, “We need to be able to say without reservation that ‘I have nothing in my background that six months from now could be exposed to the detriment of the House of Representatives.'” He said he wants to make sure the candidates have “no skeletons.”

Now, we’re down to Reps. Jason Chaffetz, R-Utah, and Daniel Webster, R-Florida. There was a brief moment when Paul Ryan was floated and Ryan said nyet to that. McCarthy gave no indication of dropping out earlier in the day. “It’s going to go great,” he said Thursday morning. All that changed in the blink of an eye – either something came out or someone got to him and I believe that something is Renee Ellmers. Webster is the favorite of the House Freedom Caucus and now stands an excellent chance of coming out on top. I find it odd that suddenly Boehner leaves and then McCarthy. Very interesting. Here’s your big clue though… Walter Jones asking that any candidate with ‘misdeeds’ withdraw. Looks like someone got caught with both hands in the Renee Ellmers cookie jar. Just sayin’. The liberals are claiming[3] that the conservatives drove both Boehner and McCarthy out. It would take a lot more than a few Tea Party activists to get those two bureaucrats to vacate. But whatever. Representative Tim Huelskamp, Republican of Kansas, echoed the sentiments of many to have been leading the revolt when he said, “We’re looking for a speaker who works with the conservatives not against us.” Amen brother, amen.