There is a very good reason[1] that so many conservatives don’t trust Marco Rubio. Some would have you believe it was youthful naivete and inexperience that allowed him to be compromised by the Gang of Eight. I don’t think so. I think he was offered money and power and immediately caved. Donald Trump’s Senior Policy Adviser, Stephen Miller, is telling a story about Marco Rubio and how he treated an ICE officer during the Gang of Eight’s manipulations and it is revealing. Not in a good way either. Miller was the communications director for Sen. Jeff Sessions, so he was there and knows how it went down. Rubio’s treatment of Immigration and Customs Enforcement (ICE) union president Chris Crane, who represents thousands of ICE officers, was simply disgraceful. He was at a meeting where Schumer was speaking with Rubio at his side and Crane wanted to ask a question. He repeatedly asked to be recognized and Schumer wouldn’t do so. He eventually had Crane, an ICE agent and a Marine, removed from the meeting. Rubio stood there, stone faced and did nothing. Nothing except break every promise he had made to Crane and America about border security and Amnesty. 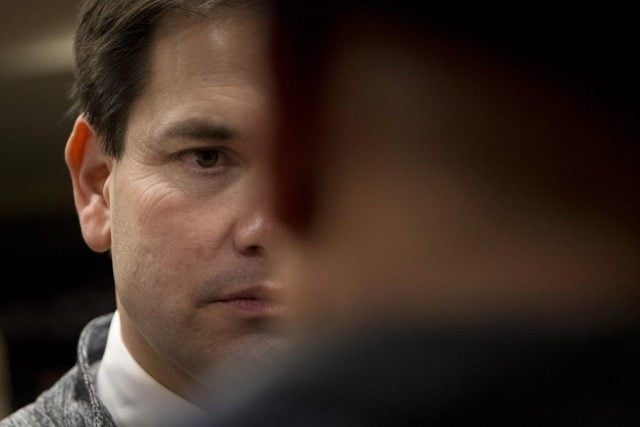 On today’s program of Breitbart News Daily, Donald Trump’s Senior Policy Adviser, Stephen Miller, shared his never-before publicly discussed insights into Sen. Marco Rubio’s duplicitous conduct during his push to get the Gang of Eight bill through the Senate.

At that time, Miller served as the communications director for the man who organized opposition to the bill, Senator Sen. Jeff Sessions. Miller recalled how throughout the Gang of Eight push, Sen. Rubio “directly deceived” immigration law enforcement and the American people.

Miller recounted one story in particular about Rubio’s treatment of Immigration and Customs Enforcement (ICE) union president Chris Crane, who represents thousands of ICE officers. At the time, Crane slammed Rubio for having “directly misled law enforcement.” In his Congressional testimony, Crane said[3], “Never before have I seen such contempt for law enforcement officers as what I’ve seen from the Gang of Eight.”

For the first time ever, Stephen Miller explained exactly what Rubio did to Chris Crane and how he had deceived the nation’s ICE officers.

Before that infamous meeting, Crane secured a meeting with Rubio after numerous attempts. He wanted to bring a rep from Sessions’ office who knew the legalities of the situation for backup, but Rubio wouldn’t allow it. Rubio assured Crane that illegal aliens would not be legalized and would not get welfare and food stamps. He promised him resources for the 7,000 ICE agents Crane represented. Rubio lied and broke every one of those promises. He schmoozed with La Raza, the Chamber of Commerce, Barack Obama and every pro-immigration group out there. He still refers to a ‘pathway to citizenship’. That’s Amnesty. Rubio is adept in covering up what he really believes and what he really intends. He is an establishment shill. The only two who aren’t are Trump and Cruz. So, you can see why I find the polls suddenly showing Rubio surging as suspect. You couldn’t trust Rubio then, you can’t trust him now.