Donald Trump rocked a sold out house[1] at the Robert’s Arena in Sarasota, Florida. The arena holds 4500 people. 12,000 signed up for the free event and the line was 5 blocks long. Not everyone got in by a long shot for this one. He even held a rally coming off his helicopter and people could simply not get enough of The Donald. Muslims and illegal immigrants protested the honey badger of conservative politics… he just doesn’t give a crap. Trump’s straight, no holds barred talk is drawing millions into what is looking more and more like a landslide right into the Republican nomination. Holy cow, they love this man in Florida! 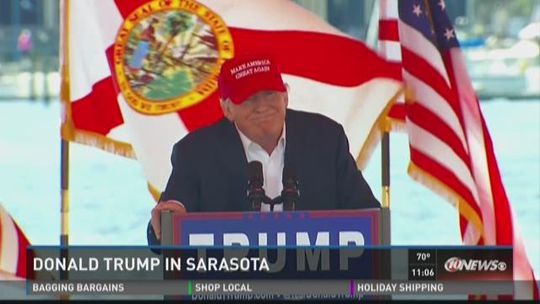 Businessman Donald Trump is holding a rally this morning at the Robarts Arena[3] in Sarasota, Florida.

Gateway Pundit reporter Kristinn Taylor is standing in line outside the event. Kristinn says one line is three blocks long and the other line to the arena is five blocks long.

The line outside Robarts Arena is five blocks long!

The event is sold out. Not everyone will get in.

A couple dozen Muslim and Illegal immigrant protesters showed up outside the event.

IT WAS A PACKED HOUSE—

Kristinn reports: Trump giving stemwinder to overflow crowd outside arena after getting off helicopter. Sound is piped in auditorium.

Far left protesters showed and were tossed repeatedly to the raucous cheers of the crowd. The RINO mafia is in full beast mode panic over the numbers swooning for Trump and Cruz. They are so desperate, Karl Rove just made his move…[4] he opened his Rolodex to Ben Carson because they’ll take anyone but Donald Trump and Ted Cruz… the two who have stood their ground together against the establishment. That tells you all you need to know right there folks. Yowza. Trump spoke about immigration, the economy, Obamacare and pledged to do more for military veterans who he called his biggest heroes. Earlier this week, the Trump campaign announced the hiring of four new staffers. Named were Jennifer R. Locetta as deputy State Director; Ken Mayo as Director of Field Operations; John Ross Pughe as Southeast Regional Field Director; and, Craig Bachler, as Director of Coalitions. Trump’s message appeals to conservatives, independents, disillusioned traditional Democrats and increasingly more black Americans who are disenfranchised from a Democrat Party that has gone so far out in left field in their representation of illegal aliens and Islamists that they don’t even hide the fact anymore they don’t intend to represent the interests of American citizens. Everything may be about to change as Trump storms the country in the battle for the presidency.