History in the making.[1] Ted Cruz has stood from the very beginning for Israel and against the evil Mullahs of Iran. This time, he took his Reaganesque message to a synagogue in Beverly Hills – in front of Iranian Jews. Cruz is right… if the Iranian deal goes through and they receive somewhere between $100 and $200 billion in blood money, the US will become the de facto largest sponsor of Islamic terrorism on the planet. That’s just a brutal fact and Cruz has the stones to bluntly state it. We are in the midst of history here and it will judge our actions harshly as a nation. It’s life and death at play here. Not just for the Israelis, but for America. That money that Obama is so hot to hand over to murderous theocrats will be used to attack us here at home – with ballistic missiles and nuclear weapons. 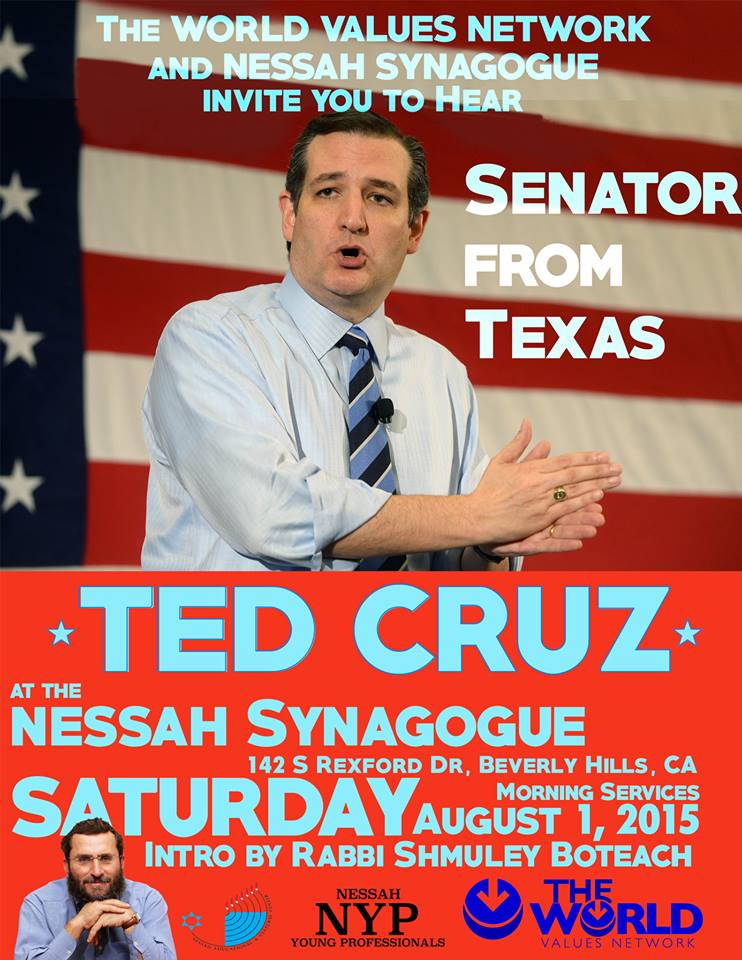 The Nessah Synagogue in Beverly Hills, California was filled to capacity during Shabbat services Saturday morning where Rabbi Schmalzy Boteach and Senator Ted Cruz were scheduled to speak. Many of those attending said they felt they were witnessing an “important part of history.”

Rabbi Boteach opened with a call to action, urging congregants to be united in speaking out and to be courageous in spreading the truth. He said the Iranian deal and the insanity surrounding it has made getting involved a matter of life and death, and because most of the congregation of Nessah Synagogue were Iranian Jews they understood this more than most.

When introducing Sen. Cruz, Rabbi Boteach talked about how Cruz has often risked his career by taking a few “roads less popular” and commended him for continuously speaking out for the people instead of the D.C. crowd‬. The Rabbi also mentioned work Sen. Cruz has done both publicly and “quietly, behind the scenes” for Israel.

In turn, Senator Cruz began by expressing his love and respect for Israel. He talked about the difficulties in sometimes having to stand alone when others are afraid to get involved, and the firestorm he’s endured as a result (not only by the press but also by the ‘Washington Cartel’). But he said he will continue to shine the “burning light of truth” no matter what.

Cruz also pledged to fight the Iranian deal with everything he has. He discussed the current narrative that the Leftist media and their minions are pushing, that without the Iranian deal we will have war. Cruz reminded everyone that no matter what America wants, Islam is already at war with America. Their goal is to obliterate Israel and America and they will continue trying to do so, as they’ve done throughout history. He said if we give Iran $100 billion in this deal, “America will become the #1 provider to terrorism in the entire world!” Thus we will be aiding and abetting Iran to gain weapons of mass destruction, helping them achieve their goals of universal conquest much sooner .

Throughout his speech, Cruz was given multiple standing ovations and at the end all the men sang a joyous Hebrew song.

On a personal level, I felt blessed that my husband and I were able to witness such an event. Rabbi Boteach’s call to action is what every church and synagogue in America should be shouting from the rafters because this is no longer ‘simply politics.’ My favorite American president is George Washington and after all the damage done by the Socialist-communist-leaning Democrats of late (and the Democrat-leaning Republicans), I’m convinced America needs a General-esque president in 2016 to lead us out of this mess. Cruz may not be an “actual” general, but if we were in a battle, I would certainly feel safe with someone like him leading the way.

The days of “going along to get along” are over for every one of us. We need fearless leaders who are willing and able to fight–not with weapons or war but by using “peace through strength.” And we need leaders who can be shining examples to others who aren’t sure what this concept means.

The time for fighting has arrived. If that means fighting enemies within as well as those without, then so be it. Cruz will never relent. This is why I think he would make such a fantastic president. He would not only rebuild our nation, he would take it militarily to our enemies, who would quickly fold in the face of an American president who means what he says and won’t back down. Israel has been treated abysmally by Obama and his Leftist minions. They have been our strongest ally and friend for generations and Obama simply couldn’t wait to stab them in the back and set them up for slaughter. The Washington Cartel may cuddle with Islamic fascists between the sheets, but Americans prefer a moral and courageous leader who gets his cues from a higher power and isn’t afraid to dance with Twelvers if need be.