Yesterday at Right Wing News, I wrote the following[1] about the stalker/journalist who moved in next to Sarah Palin,

Here’s a thought: Build a fence taller than the rented house, knock it out in a week, and then hold a press conference in front of it asking why the federal government can’t do the same thing on the border? Not only would that be genius; it would be a very Palin thing to do. Keep giving the [email protected] Hell, Sarah!

Well folks, ask and ye shall receive. Take a look at the border between the Palins and the stalkerazzi next door as of today[2], 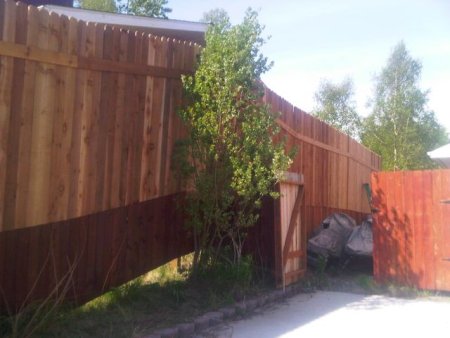 I nominate Todd Palin for border czar. If only our federal government acted as swiftly and decisively to protect the nation’s borders from intrusion…

Speaking of Michelle Malkin, remember when the Left was calling her a stalker? She actually drove out to the commercial property of a family being used as spokesmen by the Democrats and talked to someone there for a story — you know, the sort of thing reporters do every day a week that they’re not turning Democratic press releases into articles. Now, some liberal weirdo moves to Alaska, next door to Sarah Palin, and liberals are defending it. * Jimmy Swaggart couldn’t match the average liberal in the hypocrisy department…

Correction: Originally, I said Jerry Falwell, not Jimmy Swaggart. Although I’m not the biggest fan of: :  the:  good reverend, he’s not whom : I intended to take a shot at there. My apologies for the careless error.