The Fix Was In: In Harsh Blow to Conservatives, Paul Ryan is Formally Elected House Speaker

Disappointing does not adequately describe[1] how I feel about Paul Ryan becoming Speaker of the House. More like devastated. He pretended that he did not want the job, which I believe is untrue. I think he coveted the position and manipulated the House into getting it. Paul Ryan is John Boehner-lite. He’s a pro-Amnesty Progressive on the right and, unless I’m greatly mistaken, will be an unmitigated disaster for Republicans. At the rate we are going, the GOP is going toes up and soon. God help them if they try to rig the nomination outcome. That would not only signal the very end of the Republican Party but the demise of the nation. The fix was in for Paul Ryan from the beginning, I’m convinced of it. 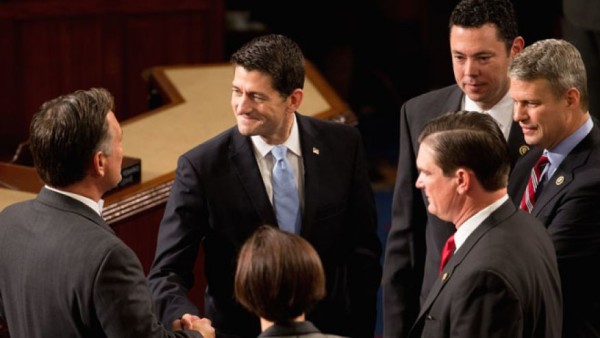 WASHINGTON – Republican Rep. Paul Ryan was formally elected House speaker Thursday, and will take the gavel from John Boehner as he tries to heal deep divisions in the party.

The selection of Ryan marks the end of a head-spinning and unpredictable succession. Boehner shocked Washington by resigning mid-term, and only after his deputy Kevin McCarthy suddenly bowed out of the race to replace him did Ryan seek the job — after initially rebuffing appeals to do so.

Ryan, though, vowed to do his best to start “turning a page” in the House, where Boehner has sparred with a conservative wing whose legislative demands and penchant for battle over once-routine items have in turn frustrated GOP leadership.

“Our party has lost its vision, and we are going to replace it with a vision,” Ryan said Wednesday.

The Wisconsin congressman and 2012 GOP vice presidential nominee was elected with 236 votes, a majority. The outcome effectively was predetermined after he locked down most Republican members’ support. Democrats put up their leader, Nancy Pelosi, who got 184 votes, to run on Thursday. But Ryan’s chief GOP opponent Daniel Webster, R-Fla., took himself out of the running after Ryan easily beat him for the nomination — though several Republicans voted for Webster on the floor anyway.

Amiable and just 45, Ryan has been in Congress 17 years and has strong ties with all wings of the GOP. Past chairman of the House Budget Committee and current head of the Ways and Means Committee, he has put his imprint on deficit reduction, tax, health and trade legislation — prime subjects that have raised his stature and put him at the center of many of Congress’ highest profile debates.

Many Democrats like Ryan but none is hesitating to attack him as a symbol of Republican policies they consider harsh. These include efforts to reshape Medicare into a voucher-like program, squeeze savings from Medicaid and pare taxes for the rich.

Ryan becomes the House’s 54th speaker, putting him second in line to succeed the president, and the youngest speaker since Rep. James Blaine, R-Maine, who was 39 when he took the job in 1869.

Ryan was elected Thursday after Boehner, the 25-year House veteran who stunningly announced his resignation last month after leading the House since 2011, delivered emotional farewell remarks.

Ryan’s ascension was coming as Congress neared completion of a bipartisan accord to lift the debt ceiling and fund the government for two years. The House approved the bill Wednesday 266-167, with final Senate passage on track in a few days, despite opposition from conservatives including senators seeking the GOP presidential nomination.

The budget vote underscored Ryan’s challenge in leading Republicans who often have scant interest in compromise with Democrats, especially with a GOP presidential contest dominated by candidates who vilify Washington insiders. Republicans opposed the budget deal by 167-79, but Democrats supported it unanimously.

“We’re going to have his back for the next few months and make sure that we give him the opportunity to show that he can be the leader that we hope he can be,” Labrador said.

Boehner’s resignation prompted a month of GOP turbulence after the Freedom Caucus derailed the candidacy of the heir-apparent, Majority Leader McCarthy, R-Calif.

Establishment Republicans pressured a reluctant Ryan to seek the speakership, viewing him as their best shot at patching the GOP’s ragged ruptures.

Ryan, though, set several conditions for him taking the job — including that the chamber strip a tool that can be used to oust a sitting speaker; that all major caucuses support him; and that he be able to spend time with his family.

Ryan may still try to have the provision for recalling the Speaker of the House removed. Thomas Jefferson implemented that rule. The move to strip it is a fascist move. Ryan is anti-Tea Party and anti-conservative. He is everything we did not want or need. But the deed is now done. We don’t need more compromise… more bureaucrats reaching across the aisle. We don’t need more regulations and laws – we have too many already. Everything the Republicans are doing is a farce. They passed the raising of the debt ceiling yesterday giving Obama a blank check for the rest of his term. Exactly what is the difference between the parties anymore? I agree with Rush Limbaugh… there’s lots of working together going on. All of it is to get rid of conservatives and the Tea Party. Paul Ryan is just one more indicator of that.