I am not surprised by this.[1] Ben Sasse is a constitutional conservative just like Ted Cruz is. He is looking for a genuine Reagan coalition, not a cult of personality. Sasse told Trump supporters that if it comes down to Trump or Clinton, he will most likely vote for neither. He has officially joined the #NeverTrump movement[2] and is the first senator to do so. Twitter is now suppressing #NeverTrump from trending which is also no surprise if you ask me. Ben Sasse has never been part of the establishment… he is Tea Party through and through. He also doesn’t follow the masses. He is his own man and he will follow whoever will restore our Republic constitutionally… he does not see Donald Trump as that man. 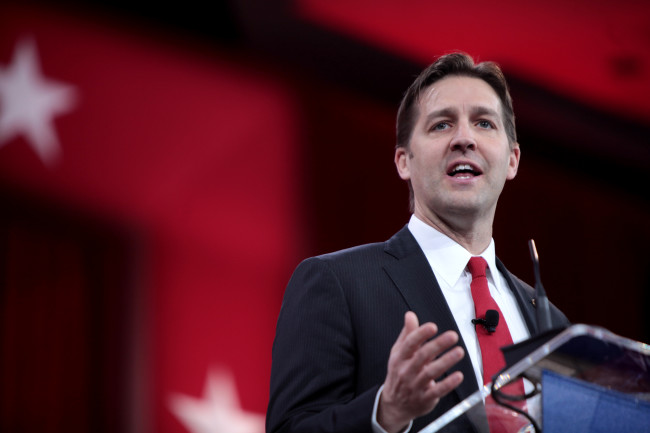 AN OPEN LETTER TO TRUMP SUPPORTERS

To my friends supporting Donald Trump:

The Trump coalition is broad and complicated, but I believe many Trump fans are well-meaning. I have spoken at length with many of you, both inside and outside Nebraska. You are rightly worried about our national direction. You ache about a crony-capitalist leadership class that is not urgent about tackling our crises. You are right to be angry.

I’m as frustrated and saddened as you are about what’s happening to our country. But I cannot support Donald Trump.

Please understand: I’m not an establishment Republican, and I will never support Hillary Clinton. I’m a movement conservative who was elected over the objections of the GOP establishment. My current answer for who I would support in a hypothetical matchup between Mr. Trump and Mrs. Clinton is: Neither of them. I sincerely hope we select one of the other GOP candidates, but if Donald Trump ends up as the GOP nominee, conservatives will need to find a third option.

Mr. Trump’s relentless focus is on dividing Americans, and on tearing down rather than building back up this glorious nation. Much like President Obama, he displays essentially no understanding of the fact that, in the American system, we have a constitutional system of checks and balances, with three separate but co-equal branches of government. And the task of public officials is to be public “servants.” The law is king, and the people are boss. But have you noticed how Mr. Trump uses the word “Reign” – like he thinks he’s running for King? It’s creepy, actually. Nebraskans are not looking for a king. We yearn instead for the recovery of a Constitutional Republic.

I have to say, I feel as Sasse does in many respects. My only caveat is I just can’t stand by and see Hillary Clinton become president. That would be the end of us. I guess we’ll have to see how this plays out. Ben Sasse will not be the last to take this stance and it took stones to come out and say this. With the mob mentality coalescing around Trump and the blind devotion to him evident, Sasse knows that his viewpoint will not be popular out there. There are things far more important than popularity or political office. Sasse eviscerates Trump with his own words and he makes a compelling argument against the man. He did not equivocally rule out voting for Trump by the way. He said it was his expectation that he would look for a third candidate. Sasse does not want Hillary as president. We are a long way from the finish line yet and minds do change. Starting this week, the tale will be told and history will start to shape itself. I admire Ben Sasse… always have. You might want to consider what the man has to say[4]. 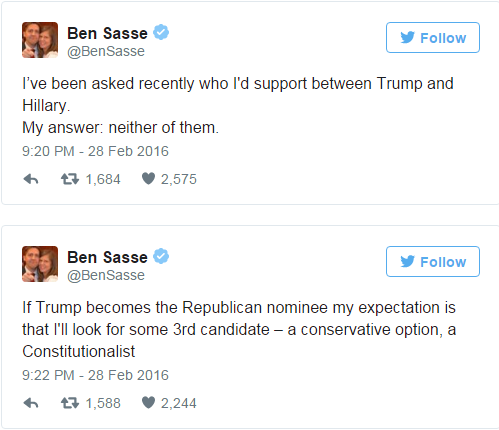