John McCain is up for reelection in 2016 and one way or the other[1], it looks like the king of all RINOS may be retiring. It can’t come soon enough for me. 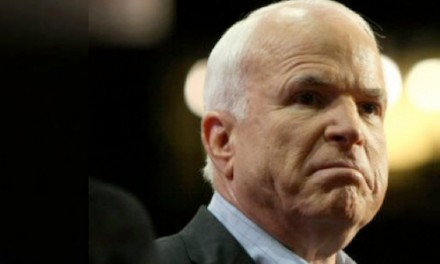 PPP’s newest Arizona poll finds that John McCain is unpopular with Republicans, Democrats, and independents alike and has now become the least popular Senator in the country. Only 30% of Arizonans approve of the job McCain is doing to 54% who disapprove. There isn’t much variability in his numbers by party- he’s at 35/55 with Republicans, 29/53 with Democrats, and 25/55 with independents, suggesting he could be vulnerable to challenges in both the primary and general elections the next time he’s up.

McCain trails in hypothetical general election match ups with both 2012 nominee Richard Carmona (41/35) and former Congresswoman Gabby Giffords (42/35). He would lead though in a match up with former Governor Janet Napolitano, 44/36. This has the potential to be an interesting one in 2016.

PS: Hey, John, can you take your daughter Megan with you into retirement?