The IRS has obviously been hiding its criminal persecution of the Tea Party for a long time now and Trey Gowdy seems to be getting tired of it. 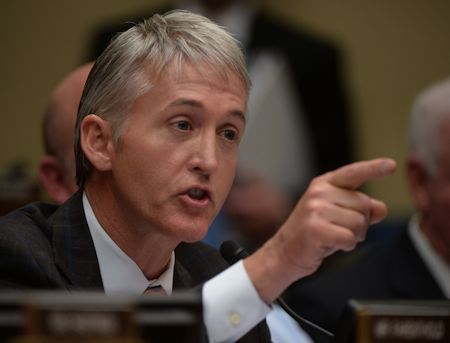 After a contentious Wednesday hearing with IRS Commissioner John Koskinen, South Carolina Republican congressman Trey Gowdy threatened to hold the top tax official in contempt of Congress unless he produces disgraced IRS official Lois Lerner’s emails by the end of this week.

Gowdy spoke with Fox News’ Greta van Susteren about Wednesday’s hearing, where a slew of GOP congressmen tore into Koskinen’s claim that responding to the Oversight committee’s subpoena for Lerner’s emails could take years.

“All we want are the emails to or from Lois Lerner – I’m not talking about private taxpayer information. That’s 6103, that’s confidential, that’s a separate conversation,” he said.

“Just emails like the one she sent celebrating a Democratic victory in a special election, calling on the FEC to save the day – overtly political, nothing to do with her job – we’ll just settle for those!” the congressman said. “And I even said just give me the ones from January 2010!”

In fact, if January 2010 emails from the head of the IRS’ Tea Party targeting are not received “by Friday,” Gowdy hinted that the committee would then target Koskinen himself.

“Well, we’re already going to do contempt of Congress for Lois Lerner,” he said, after Susteren asked what happens if the emails aren’t received. “That’s coming up in the very near future.”

It’s easy to shake our heads in contempt at how weak Barack Obama has been in the face of Putin’s invasion of Crimea, but Republicans in the House have been just as weak in the face of the Obama Administration. They talk a lot about contempt charges and the power of the purse, but then they never follow it up with any action. Put Lois Lerner in a cell for contempt and I guarantee you’ll start getting some people’s attention. Actually cut off some funds for the Obama Administration and stand tall instead of buckling and then, and only then, will House Republicans start to get a little respect from the Democrats. Again, I appreciate everything Gowdy is saying, but talk is cheap.