I like Trey Gowdy. In fact, I wish he would run for Lindsey Graham’s seat this year. But while his heart’s generally in the right place, I have trouble believing that the current “leaders” of the Republican Party have the guts to strip Obama of funding, even if we take the Senate back. These guys have a yellow streak down their backs a foot wide and it’s hard to imagine them suddenly behaving like Ted Cruz for the first time in their lives[1]. 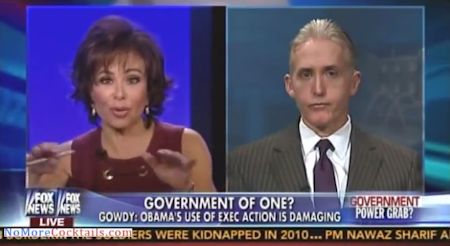 Question: Are you going to do it?

You’re blank right we’re going to do it!

Trey Gowdy is EXACTLY right. That’s EXACTLY what should be happening. But as we saw when Ted Cruz encouraged Republicans in the House to do just that over Obamacare, the leadership in the Republican Party doesn’t have the guts to stand up to Obama in a fight. It takes a minimum amount of political courage to do the right thing and so far, the GOP “leaders” in the House and Senate haven’t shown that they possess it. Maybe they’ll be replaced before then. Maybe the pressure that people like Ted Cruz, Mike Lee and Trey Gowdy are putting on them will be so overwhelming that they’ll HAVE TO DO IT. But cowards usually remain cowards unless they have no choice other than to fight.