Once again[1], Trump viciously attacked Ted Cruz during the debate. I consider it a badge of honor that other politicians don’t like the Christian character and principles of Ted Cruz. Of course Trump will cut deals with all of them on both sides of the aisle. He’s done it forever and he’ll keep doing it. This time when Trump went on about how no one likes Cruz, Ted fought back and said what I just put forth. Now, I think Trump hiring workers on guest visas is fine. That part I disagree with. But he has indeed made deals with Reid and Pelosi. He likes both of them and he likes Schumer. That gives me the willies. 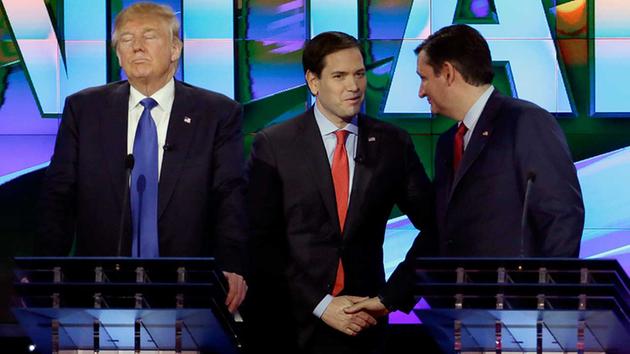 Cruz didn’t take this lying down and hit back at Trump hard. “You know I actually think Donald is right, he is promising if he’s elected he will go and cut deals in Washington. And he’s right, he has given hundreds of thousands of dollars to Democrats.”

Then Trump accused Cruz of being Robinhood, who was going to stand against corruption while also taking loans from Goldman Sachs and Citibank. Guess who else took loans from Goldman Sachs and Citibank? Donald Trump and far more than Ted Cruz ever did. Cruz overlooked one signature on a form and Trump has morphed that into misdeeds. Trump has lied about Cruz’s dealings and character all along the way here. You won’t find a better man out there than Ted Cruz. He’s also a good person and a strict constitutionalist. I’m beyond tired of him being maligned. I want to support Trump too, but his behavior is just horrid and dishonest. Cruz let him have it and rightly so… if you want someone who cuts deals and is ‘liked’ by other scumbag politicians, I guess Trump is your guy. Just remember that if he is elected.