Oh, come on![1] So, Lindsey Graham, aka The Dancing Queen, is unleashed to defend his bud John McCain. The Burqa Twins strike again. I don’t agree with The Donald on giving out Lindsey’s phone number, but where is the outcry over Graham calling Trump a jackass? Graham should bow out of the race – he’s at 0 percent and his campaign is not going anywhere – ever. Graham could no more lead this country than he could arm wrestle Donald Trump. This whole dust up hasn’t hurt Trump at all in the polls… in fact, his lead has widened. Americans are eating this up. And Trump is talking about the border… about illegal immigrants… about crime and sovereignty. Something the people are starving for. And everyone knows, when you are losing bring out the old tried and true, ‘You’re letting the other side win!’ platitude. No, the other side keeps winning because of weak, sissified RINOs like Lindsey Graham. 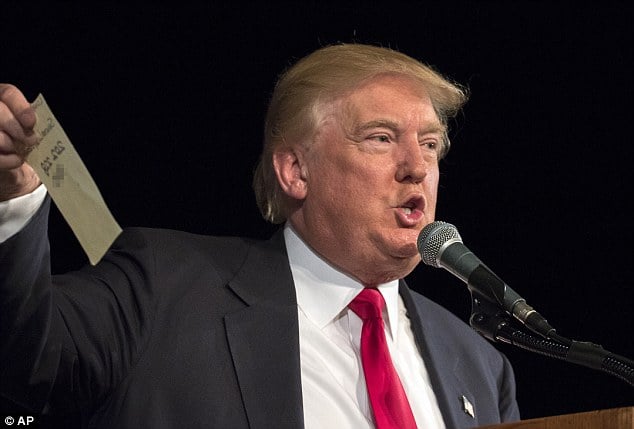 Donald Trump took his war of words with South Carolina Sen. Lindsey Graham to a new level on Tuesday, reading his personal cell phone number aloud during a speech in the senator’s home state and urging people to call him.

Billionaire Donald Trump upped the ante on Tuesday in his ongoing feud with Lindsey Graham, reading the senator’s private cell phone number to a crowd in his home state of South Carolina – and urging them to call it to complain directly to him.

The two presidential candidates have been driving media coverage with a tit-for-tat series of insults. On Tuesday, Trump called Graham an ‘idiot.’

Hours earlier, Graham told the CBS[3] ‘This Morning’ audience that Trump should ‘stay in the race’ if he wants to, but ‘just stop being a jackass.’

Trump gave out the phone number duing a televised speech, and urged South Carolinians gathered at the Sun City retirement communtiy near Myrtle Beach to call their senior senator.

‘Give it a shot,’ Trump said, reading off the number, which began with Washington, D.C.’s 202 area code.

He also questioned Graham’s intelligence, saying that ‘he doesn’t seem like a very bright guy.’

‘I think Rick Perry is probably smarter than Lindsey Graham. But what do I know? He’s got the glasses.’

Trump was mocking Perry’s new look – he began wearing eyeglasses last year – and playing on a stereotpye Perry reinfocred in a 2011 debate when he ouldn’t recall which three federal agencies he had said he would shut down as president.

Graham, Trump jabbed, ‘actually seems to me not as bright, obviously, as Rick Perry. I think Rick Perry probably is smarter than Lindsey Graham.’

‘What a stiff!’ he boomed. ‘What a stiff, Lindsey Graham. By the way he has registered zero in the polls. A total lightweight. In the private sector, he couldn’t get a job.’

Trump produced a piece of paper on which he said Graham’s cell phone number was written, after asking aloud: ‘Didn’t this guy call me four years ago? Yes, he called me three or four years ago, Lindsey Graham, I didn’t even know who he was.’

He said Graham had asked him for a positive reference to a producer for the ‘Fox and Friends’ morning show on the Fox News Channel, and also hit him up for a campaign donation.

Graham started the war of words over the weekend, slamming Trump for claiming on Saturday that his fellow US senator John McCain was ‘not a war hero.’

Graham’s poll numbers are hovering between 0 and 2 per cent.

‘He’s zero in the polls!’ Trump shouted on Tuesday, yet ‘he’s on television all the time!’

Before Graham’s voicemail mailbox filled up, a Politico reporter called the number Trump read aloud and talked with the senator.

‘I wonder what caused that,’ Graham said drily.

‘When it comes to the Donald, nothing surprises me anymore,’ he said. ‘It’s just too bad, really.’

Graham campaign manager Christian Ferry said in a statement that time and attention lavished on the real estate mogul could be better spent.

‘Trump continues to show hourly that he is ill-prepared to be commander in chief,’ the statement read.

As far as taking the focus off the ‘horrible Iran deal,’ Trump has non-stop addressed that issue. You know, inbetween being misquoted by the Marxist media. As for national security, McCain has done absolutely nothing that is workable or that is Constitutional to ensure said security. What McCain and his camp are accusing Trump of, they are far more guilty of. Trump would be a million times more preferable than Lindsey Graham as a Commander-in-Chief. I’d rather have a successful businessman who has a set, than some girly-man who sips mint juleps all day long and fans himself. You know who Graham sees as his First Lady? His sister. God help us… with someone like that at the helm, you might as well just escort the Iranians, Chinese and Russians right on into the People’s House. No conquering necessary. Look at the funny Americans! They’re led by a fop!! I agree the name calling and phone number sharing needs to stop. But Trump has struck a nerve in America and the people like it. Graham, not so much. In fact, Graham, who? 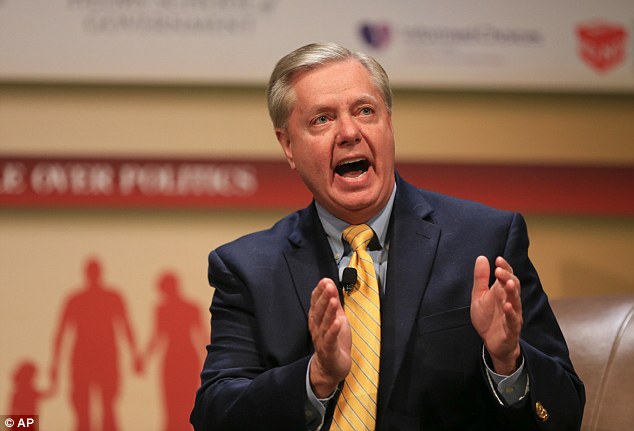 Republican presidential candidate Sen. Lindsey Graham saw his cell phone ring off the hook on Tuesday after Trump gave out the number and a half-hour later the voicemail mailbox was full.