Trump Was A Huge Ratings Hit On Saturday Night Live. They Had Their Best Numbers Since… [Video]

Donald Trump is certainly good for ratings and business.[1] Last night’s appearance gave SNL the highest ratings they have had since 2012. He put Hillary Clinton and Miley Cyrus to shame. That’s not surprising at all. He’s charismatic, funny and entertaining. Hillary is boring, self-absorbed and pedantic. Miley Cyrus? She’s just tacky. Trump knew the ratings would sky-rocket and he’s not bashful about saying so. With the following the man has, I just can’t believe the polls that say Carson is in the lead. Trump is almost legendary out there and just draws fans by the thousands. He’s HUGE! 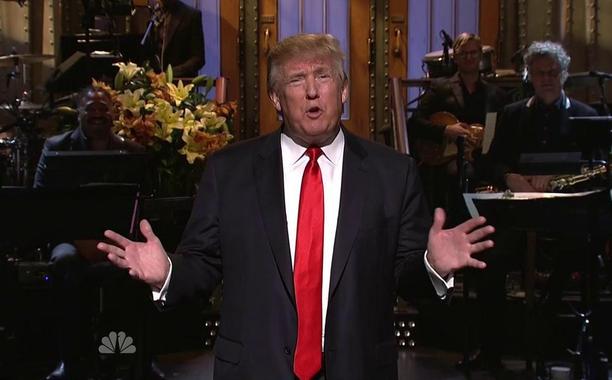 Trump is still bringing the bump.

According to NBC, SNL had a whopping 6.6 household rating on Saturday night, easily beating the season’s previous high: the 41st season premiere last month, hosted by Miley Cyrus and with a guest appearance by none other than … Hillary Clinton. In fact, Trump’s overnight rating was 47 percent higher than the Miley/Hillary episode.

The previous high was held by an episode that aired Jan. 7, 2012, hosted by Charles Barkley with musical guest Kelly Clarkson.

Saturday night marked the Republican presidential hopeful’s second time hosting the iconic late-night series. He previously acted as host in 2004 when Trump was still the host of NBC’s The Apprentice.

Trump was pretty confident he’d boost SNL’s numbers. “I get the best ratings,” he reportedly said[3] when asked about the appearance.

The actual number of SNL viewers will be available later in the week. But for point of comparison, the season premiere delivered 6.3 million viewers, so Trump’s episode could be close to 10 million.

For more, here’s EW’s recap of Trump’s appearance on SNL[4], including video clips of Trump’s sketches.

Love him or hate him, people just can’t get enough of Donald Trump. He is a rock star. Trump is addressing what the people want to hear about: illegal immigration, taxes and the economy. He also doesn’t back down and has no problem slapping the media around. Americans love that. The media just doesn’t get it. They don’t understand that Americans want to be proud of their country once again. They want their great nation back and they want their sovereignty restored. Trump speaks to what Americans are feeling deep inside… he is the voice of Mr. and Mrs. Main Street America. Every show Trump appears on has killer ratings. SNL is just the latest. There is no false modesty. The people just eat up his brashness and in-your-face greatness. Controversy energizes him. Trump’s segments made the show. They should have him on more often.