Leading Republicans: will raise money and strategize on defeating tea party and other conservative Republican challengers in a conclave at Amelia Island, Fla., on April’s first weekend, according to: Red State. 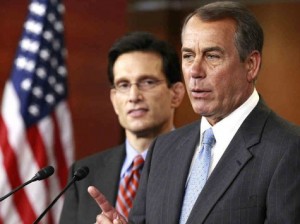 Getting contributions of $5,000 per guest, plus donations from lobbyists and influence-peddlersâ€¯invested in maintaining the status quo, LaTourette stands to raise a significant amount of money targeting anti-establishment GOP candidates. More exasperating is that the true financiers lurking behind the curtains are radical Democrats such as George Soros, leftist unions and unnamed fatcats, according to Red State.

The unholy alliance will schmooze with five-star charm at the Ritz Carlton Hotel, as GOP leaders plot to return milquetoast, get-along Republicans to office, or help upstart conservatives go down to ignominious defeat.

LaTourette, a former Ohio Republican congressman-turned-lobbyist, has parlayed his connections into a well-heeled enterprise inside the Beltway. His corporate sponsors contend their goal is to “bolster our incumbents who are under attack from the far right, and ensure that we hold on to seats represented by pragmatic Republicans that we would otherwise lose if there was an ultra-conservative in the general runoff,” according to Red State.