I’m torn over all of this.[1] There was a time when I truly admired and loved Sarah Palin. Those days are pretty much over. When she turned on Cruz the way she did, I saw her in a whole new light and it was not flattering. I hope she chose wisely… I know I did. She was just on the “Today” show and Savannah Guthrie tried to nail her on her son Track’s recent arrest. Palin took great umbrage at the question and accused them of breaking a promise to leave her family out of this and to just have her discuss Iowa. They should leave her family out of it. But Palin using PTSD as a cover for her son’s bad behavior is thin at best. I don’t understand going on these liberal shows to begin with. You know they are going to lie and then ravage you. That’s what they do. 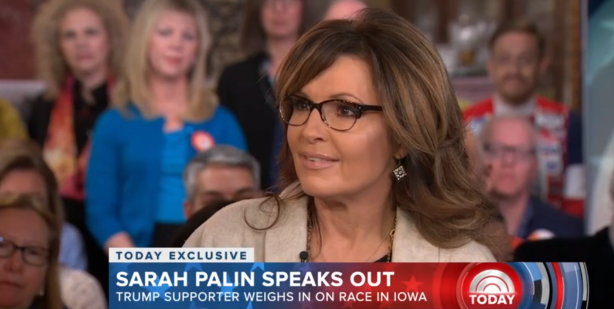 Former Alaska Gov. Sarah Palin was visibly annoyed with “Today” co-host Savannah Guthrie on Monday after the journalist broke what Palin interpreted as a “promise” to not to ask about her son Track Palin.

“I want to ask you about something you mentioned on the campaign trail, which is the arrest of your son Track. You talked about it, and then you mentioned PTSD and you said that President Obama may be to blame for some of the PTSD that’s out there,” Guthrie said.

“I never said that,” Palin shot back. “You guys brought me here to talk about Iowa politics and the caucus tonight, not to talk about my kids. And that was a promise.”

She added, “But as things go in the world of media, you guys don’t always keep your promises evidently.”

Palin was asked if she regretted her comments about her son and she demanded: “What did I say that is offensive?” I agree. This is low even for a show like “Today.” She went on to say: “I don’t regret any comment that I made because I didn’t lay PTSD at the foot of the president,” Palin argued. “I did say though that there is – and adamantly that our president needs to let the military do their job. If you have a specific quote, it allows the media to be credible if you would tell me what you’re talking about.” Lauer told her that there were no specific promises made about the content of the interview and that it was her first since her endorsement, just before cutting the interview short and moving on to weatherman Al Roker and his interview with an Iowa woman who had built a statue of a cow made of butter. How apropos. What a bunch of sleazoids. I may not be happy with Palin at the moment, but she didn’t deserve to be treated like that. It’s deplorable. It’s also to be expected.