What? Perry’s Weird Response to Trump: ‘A broken clock is right once a day’

Rick Perry’s response to Gretchen Carlson[1] on Donald Trump claiming he was dropping out of the presidential race was just downright weird. He said, “You know, a broken clock is right once a day.” First off, it’s ‘twice’ a day. But aside from that, it sounded a lot like he was indeed dropping out of the race. He then backtracked, but didn’t quite say he was still running. It sounded very, very strange. He lost his campaign manager in Iowa to Trump and he laid off his campaign staff. That looks like a failed run to me. If he’s staying in, it’s only to jab at Donald Trump and frankly, The Donald doesn’t care much about Rick Perry and his slurs these days. I’m sure Perry is a good guy, but Trump is trouncing him. He’s cleaning his clock, if you will. 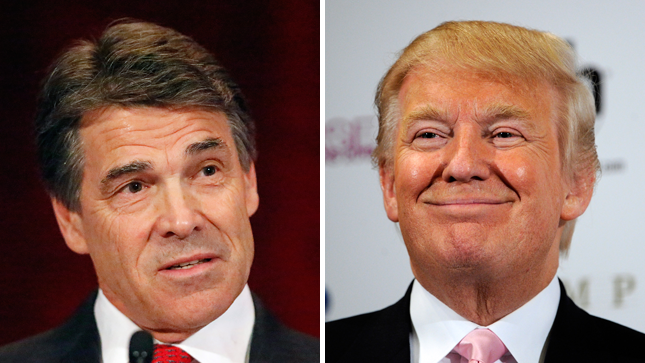 Former Texas Gov. Rick Perry[3] utterly humiliated himself in an attempt to insult GOP front-runner, Donald Trump, on Thursday. Perry gave a completely puzzling response to The Donald’s assertion that Perry is dropping out of the presidential race.

“You know, a broken clock is right once a day,” Perry said to Gretchen Carlson[4] of Fox News.

Well, he kind of missed the mark there, as the old adage that describes someone who finally gets something[5] right is actually “A broken clock is right twice a day.”

And what does that mean, anyway? That Trump was right about Perry giving up his presidential run? But that’s the opposite of what Perry was apparently trying to communicate.

Perry quickly tried to cover his own shame stating: “The bottom line is I’m still here and I’m still working and we need to be talking about solutions and not just rhetoric out there.”

Trump’s assertion came during a  New York news conference statement where he concluded that Perry was “getting out of the race[6].”

This is more than just a statement based on various data that Trump had collected. Perry’s campaign has been struggling: his standing in the polls[8] has dropped through the floor, he was forced to lay off paid staffers — and, of course, his Iowa chairman quit his campaign and joined Trump’s.

The former Texas governor has had public spats with the popular front-runner, so it is no surprise that his ratings have suffered. You don’t mess with The Donald and expect to come out unscathed.

Perry previously called for Trump to drop out of the presidential race and compared the front-runner to cancer.

Well, it looks like someone will be dropping out soon, but our guess is, it won’t be Trump. Only time will tell what will happen to Perry … but don’t ask him. Apparently he doesn’t understand the concept of time!

Perry will be gone shortly I would wager. Lindsey Graham is toast as well. The field is beginning to narrow and Trump’s lead is growing more and more. In fact, he’s now beating Hillary Clinton by five points. It would take a monumental force to derail the Trump train and I don’t see it happening. Perry has to be at about zero right now in the polls. There comes a time when you need to be honest with yourself, quit bleeding funds and pick up and go on. This is one of those times for Rick Perry. The barbed spats with Trump won’t make a bit of difference at this point. This was just one more embarrassing joust with Trump. If you are going to dance with The Donald, you really should know what time it is first.