Whoa! In Protest, Steve King Walks Out On SOTU Over This: ‘I Can’t Do This Again’

Republican Steve King of Iowa[1] just couldn’t take it one more time, so he walked out before Obama gave his SOTU address. Instead he went to pray in the members’ chapel during Obama’s lies. He prayed for the millions of children lost to abortion and the millions more whose deaths are sanctioned by Barack Obama. “When the president announced that he would have an empty seat up by the First Lady for those who are victims of gun violence, who no longer have a voice, and I thought of the millions and millions of unborn babies — on his first day in office he issued an executive order that accelerated abortions worldwide,” King stated. Obama left a chair empty as a political statement for those lost to gun violence. That was just factitious. So King left his chair empty in honor of abortion victims. Political quid pro quo, Clarice. 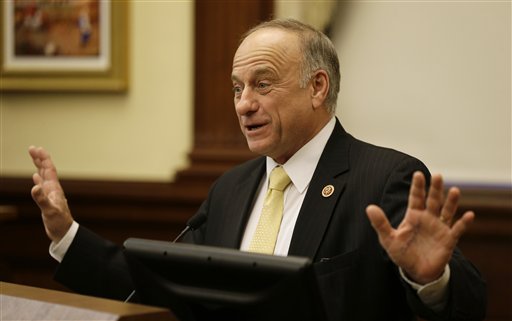 Rep. Steve King, R-Iowa, walked out of the State of the Union message Tuesday night to leave his seat empty in memory of the victims of abortion and to protest Barack Obama’s lawless presidency. The representative added that he would be in the Members’ chapel, praying that a better leader will follow the current chief executive.

As reported by Western Journalism[3], last week, President Obama announced that he would be leaving a seat next to his wife open to recognize the victims of gun violence. “They need the rest of us to speak for them. To tell their stories. To honor their memory,” the White House said in a written statement.

Yesterday, Rep. King released a statement[4] indicating that he too would be leaving an empty seat: his own. “I can’t abide being lectured to one last time,” he said.

King went on to say, “He did shed tears for the victims of Sandy Hook, and I think that’s appropriate,” he said. “But as far as we know, he’s never shed a tear for the millions of unborn babies that have been aborted since he took office. So I left my gallery seat empty, and my seat in the House chambers empty in commemoration of those who’ve never had a voice, not those who no longer have a voice, but those unborn babies who have never had a voice — and I’m going to the members’ chapel, where I’m going to spend my time there praying for the unborn, praying for the restoration of the Constitution and that God will raise up a leader whom he will use to restore the soul of America.” King has been campaigning for Ted Cruz, who is also a staunch Christian and a man of faith. Cruz also opted to not attend the SOTU as did three Supreme Court justices. Steve King finished by saying, “We have a certain affinity for tracking parallel thought processes. But I haven’t talked to him about this, this is my position, my conviction.” King and Cruz did the right thing by not attending. No one should have.

Rep. Steve King explains why he left his seat empty for #SOTU[5] – headed to Members Chapel to pray for the unborn pic.twitter.com/RD1eyU8DPB[6]