This is huge![1] The National Black Republican Association officially endorsed Donald Trump in a statement yesterday for his bid for the GOP presidential nomination. It stated: “We, the grassroots activists of the National Black Republican Association, are pleased to announce our endorsement of Donald J. Trump for President of the United States of America.” The association is comprised of grassroot activists and was founded in 2005. Illegal immigration has deeply impacted African-Americans. It has taken jobs away from them and has heavily contributed to high black unemployment. This endorsement shows the broad coalition that Donald Trump commands in his campaign. This must scare the ever-loving crap out of the Democrats. 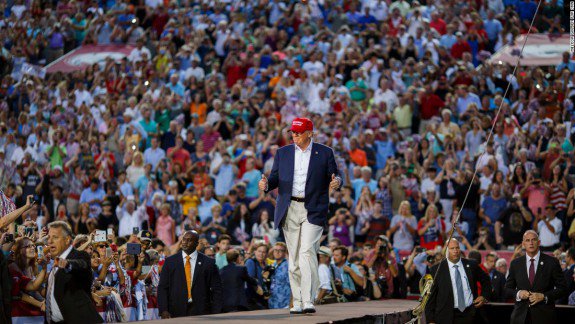 We, the grassroots activists of the National Black Republican Association, are pleased to announce our endorsement of Donald J. Trump for President of the United States of America.

As citizens who happen to be black, we support Mr. Trump because he shares our values. We, like Mr. Trump, are fiscally conservative, steadfastly pro-life and believers in a small government that fosters freedom for individuals and businesses, so they can grow and become prosperous.

We are deeply concerned about illegal immigration, a major cause of high black unemployment, especially among black youth.

Black Americans across America are beginning to wake up and see clearly the reality of what is happening in black neighborhoods. Democrats have run black communities for the past 60 years and the socialist policies of the Democrats have turned those communities into economic and social wastelands, witness Detroit, Baltimore and South Chicago.

We believe that Mr. Trump has demonstrated that he can push back against the mainstream media, end political correctness and free black communities from the destructive grip of socialist Democrats.

We urge our fellow black Americans to seize control over their own destiny and leverage their vote the way other groups do. It is way past time black Americans stop having their vote taken for granted by Democrats, hold politicians accountable for the content of their policies and not vote merely based on the label of their party.

Per Gateway Pundit: “Lieutenant Colonel Frances Rice, United States Army, Retired is a native of Atlanta, Georgia and retired from the Army in 1984 after 20 years of active service. She received a Bachelor of Science degree from Drury College in 1973, a Masters of Business Administration from Golden Gate University in 1976, and a Juris Doctorate degree from the University of California, Hastings College of Law in 1977. In 2005, she became a co-founder and Chairman of the National Black Republican Association, an organization that is committed to returning African Americans to their Republican Party roots.” This is a woman who is highly educated and is retired military. She is fighting for conservative values as much of America is at present. This is a massive endorsement for Donald Trump. More to come, I’m sure.