Why I Was Rooting For Mark Sanford To Lose Yesterday

Voting for Mark Sanford would be the Republican equivalent of voting for Marion Barry, Barney Frank or Jesse Jackson Jr. #Weshouldbebetter[1]

For whatever it’s worth, key GOP movers & shakers in Mark Sanford’s district are telling me they’re confident he’s going to win.

I am rooting for Colbert Busch to beat Mark Sanford in #SC1[4]. She couldn’t win that seat again, but we could be stuck w/ him for a long time 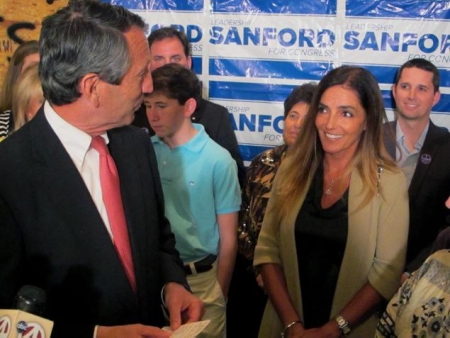 Don’t get me wrong.

I don’t think Mark Sanford should be run out of polite society or that people should turn their backs on him when he walks down the street. In fact, I even admitted that I felt a LITTLE sympathy for him when the story was breaking back in 2009[7].

Furthermore, despite myself, I felt a twinge of pity for Mark Sanford after reading this passage,

“While all the things above are all too true – at the same time we are in a hopelessly – or as you put it impossible – or how about combine and simply say hopelessly impossible situation of love. How in the world this lightening strike snuck up on us I am still not quite sure. As I have said to you before I certainly had a special feeling about you from the first time we met, but these feelings were contained and I genuinely enjoyed our special friendship and the comparing of all too many personal notes (and yes this is true even if you did occasionally tantalize me with sexual details over the years!) – but it was all safe. Where we are is not. I have thought about it and in some ways feel I let you down in letting these complications come into a friendship that I hope will last till death. In all my life I have lived by a code of honor and at a variety of levels know I have crossed lines I would have never imagined. I wish I could wish it away, but this soul-mate feel I alluded too is real and in that regard I sure don’t want to be the person complicating your life. I looked to where I often look for advice and counsel, and in I Corinthians 13 it simply says that, ” Love is patient and kind, love is not jealous or boastful, it is not arrogant or rude, Love does not insist on its own way, it is not irritable or resentful, it does not rejoice in the wrong, but rejoices in the right, Love bears all things, believes all things, hopes all things and endures all things”. In this regard it is action that goes well beyond the emotion of today or tomorrow and in this light I want to look for ways to show love in helping you to live a better – not more complicated life. I want to help (one of Maria’s sons) with film guys that might help his career, etc. I also don’t want you walking away (sic) from some guy (I take it the younger guy you mentioned a t dinner) because of me – and what we both have to see as an impossible situation. I better stop now least this really sound like the Thornbirds – wherein I was always upset with Richard Chamberlain for not dropping his ambitions and running into Maggie’s arms. The bottom line is two fold, my heart wants me to get on a plane tonight and to be in your loving arms – my head is saying how do we put the Genie back in the bottle because I sure don’t want to be encumbering you, or your options or your life. Put differently, given I love you, I don’t want to be part of the reason you are having less than an ideal week in what sounds like a cool spot.

This reminds me of a discussion I once had with a friend of mine about temptation. Her argument was that if the guy was moral enough and loved his wife enough, he’d never stray under any circumstances. I told her that I thought that if a man was moral and loved his wife, he would work very hard to stay out of situations where he could be tempted. That’s not because he’s immoral or because he doesn’t love his wife, but because the “flesh is weak” and even a good man, if he’s tempted enough, in a moment of weakness, may give in.

Reading that email, Sanford reminds me of what I was driving at. I bet if you had talked to him a year before that email was written and he told you honestly what he believed, he would have said it was more likely that he’d jump into a live volcano than cheat on his wife. He probably would have believed it, too.

That being said and granting the fact that Mark Sanford was a strong fiscal conservative, he’s not worthy of a seat in Congress. He’s a man who cheated on his wife just four years ago and he’s not sorry about it in the least. This isn’t a man who’s saying, “Forgive me, I made a mistake in the past,” he’s saying, “I cheated on my wife, so what?” That’s aside from his trespassing charge at his ex-wife’s house.

Whatever happened to the idea of expecting politicians to be A LITTLE BETTER than the rest of us instead of not caring what sort of scumbags they might happen to be? Sure, Democrats regularly vote for loathsome freaks like Barney Frank, Marion Barry and Bill Clinton, but Republicans shouldn’t be eager to go down that same road. Not only does it undercut us when we criticize the pond scum that Democrats put in office, it’s bad for the country. The whole idea that morals don’t matter in government has always been bunk. In fact, the bigger government gets, the MORE MORALS MATTER.