Will: “Trump Supporters Need To Come Into The GOP On Our Terms, Not Theirs” [Video]

How very pathetic.[1] Is this the best you can muster in the way of a threat? An admonition that all Trump supporters and conservatives need to fall in line like good little robots and obey the elitist RINOs in the Republican Party? Please, spare us. The Republicans may want we the voter, but we the voter are far from sure we want the Republican Party. For the record, I wholeheartedly support the John Birch Society. There I said it. Stuff that in your teleprompter. Of course I support them… I’m a commie hunter. You are not going to read me the riot act and I would bet that millions feel just as I do. Who do you think you are exactly? The Republican Party is supposed to serve the voters, not the other way around. 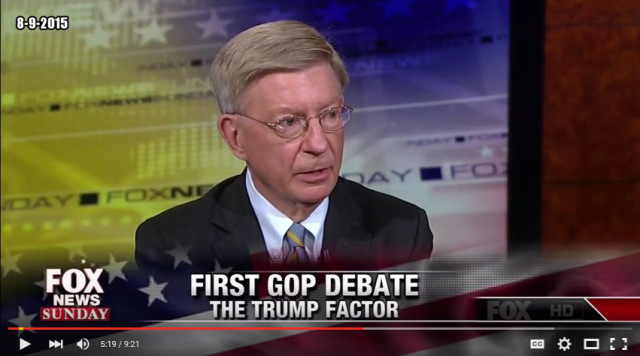 From The Conservative Treehouse:

The Pontificating Arrogance of The GOPe

In a very clear and deliberate delivery of how the GOPe establishment view those who do not want to accept Jeb Bush in the White House, the republican party elitist and BFF of Charles Krauthammer, George Will, outlines the acceptable parameters for Donald Trump supporters -those unwashed, unintelligent masses- to be good little Republicans.

Notice – As George Will begins to opine with the visible display of his superiority, and fully present his disgust toward the base of the party, he glances toward Laura Ingraham – because Will is judging how far he can go displaying his inherent disdain of the insufferable “crazies”, “hobbits” and “whacko birds”.

It’s not just Trump these fascists hate, it’s his message. They don’t want illegal immigration brought to the forefront and fear the overwhelming response from Americans against their sovereignty-destroying measures. They also hate free trade and even a hint of creating jobs for the masses, out of their control that is. And the nationalism factor that Trump espouses when he proclaims that he loves America and wants to see her great again? Can’t have that. That’s revolutionary, don’tcha know. The GOP will either have a coup from within and be reformed as patriots such as Trump and Cruz are calling for, or they will go the way of the Whigs and disappear. Right now there is precious little difference between the parties. Trump is out to crush the media and bring issues to the top of the heap that Americans care about. Cruz and Lee are going after the corrupt Washington Cartel. They are a clear and present threat to these elitists. Game on, boys – those are my terms. Feels like a good day to revolt, no?