Woo hoo![1] Ohio must be thrilled!! Under pressure, Ford is moving back their Mexican plant (worth 2 billion) back to the states… Youngstown, Ohio to be exact. There will be 1,000 new jobs for factory workers there. I’m sure I’m not alone with an urge to weep in relief over that one development. Ford must believe that Trump will be the next president. That’s all I can take away from this. Trump has said that if he’s elected, he will make it very expensive for manufacturers who have relocated outside the US and then sell their products back here. Ford must have done the math and figured that would cost them a great deal. Suddenly, they are coming back and I’m sure it is not out of concern for America or out of the goodness of their heart. 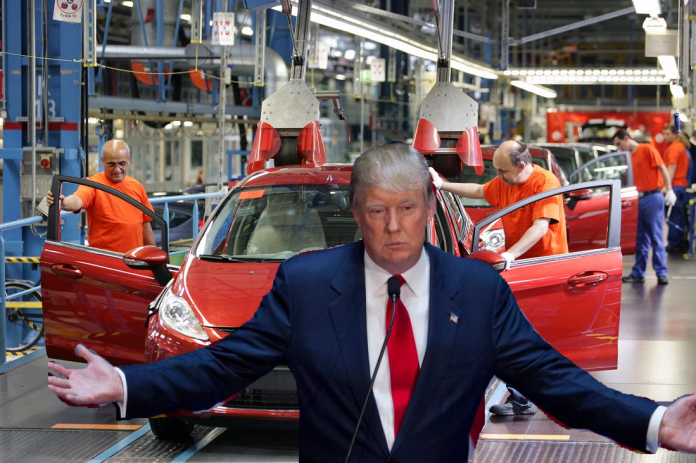 Donald Trump may not be the President yet, but his constant criticism of Ford outsourcing jobs to Mexico has caused the auto tycoon to change course and bring the $2,000,000,000 plant back to the United States.

CNN Money reports that Ford is moving its facility, originally slated for Mexico, back to the United States, where it will employ 1,000 factory workers in struggling Youngstown, Ohio.

Republican presidential candidate Donald Trump[3] recently said that if he’s elected he would take steps to make it more expensive for manufacturers to shift work to Mexico and then export the items back to the United States.

“How does that help us?” Trump said about the Ford investment in Mexico while campaigning in Michigan this week. “Mexico is becoming the new China.”

Ford has declined to comment, but many see this as a good sign, a welcome change after decades of outsourcing manufacturing plant overseas.

This is what I call ‘winning.’ Trump has given speech after speech about how Mexico is becoming the next China and is whipping our butts in manufacturing and production. Even before a possible Trump presidency, things are beginning to change for the better. I hope other companies follow suit and quickly. I see this as a very, very good sign. Trump is already having a major impact on our economy and he hasn’t even won yet. Imagine what would happen if he does win. This is epic.