This is just priceless.[1] I dare say this is karma for the Republican RINOs. Not only is Trump now beating Hillary Clinton by 5 points in the polls, he’s captured 25 percent of the black vote and 31 percent of the Hispanic vote. That my friends, is historic and has never been seen before in the Republican Party. I would be very curious to see the percentage of Blue Dog Democrats coming over to the Trump camp as well. As for conservatives and Republicans in general, Trump has blown the field away and just keeps increasing his lead. I have seen polls now saying somewhere between 28 and 30 percent of Republicans now back Trump. The Donald is on a runaway train to the nomination if this keeps up. 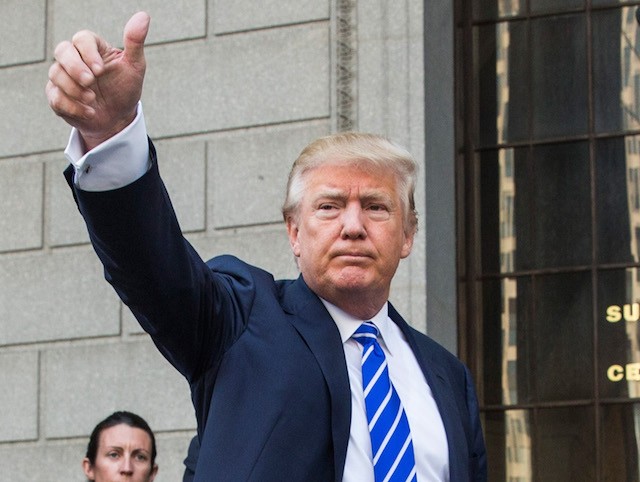 From The American Mirror:

For all the talk about Donald Trump allegedly driving minorities away from the Republican Party, could he actually bring people in?

A SurveyUSA poll[3] released Friday shows in a hypothetical matchup with Hillary Clinton, Trump is ahead 45% to 40%.

But digging into the racial breakdown of the respondents is revealing. For example, the poll finds 25% of black respondents say they would vote for Trump over Clinton.

How impressive is that? Let’s look at the last several presidential results for Republicans.

When President Obama was running for re-election, despite a sputtering economy that was impacting blacks the worst, Mitt Romney was able to muster only 6% of the black vote, according to the Roper Center[4] at the University of Connecticut.

At the time Obama was facing off against John McCain in 2008, the Republican received a measly 4%, according stats[5] from to the Roper Center.

When George W. Bush was running for re-election in 2004, he only did a little better than McCain. The organization reports Bush received 11% of the black vote, while in 2000, he received 9%.

According to the SurveyUSA poll, Trump would more than double the best result for a Republican in modern American history.

Looking at the last 10 presidential election cycles, the highest black vote share for a Republican was 12% for Bob Dole in 1996.

The SurveyUSA poll finds 31% of Hispanics would vote for Trump. In the 2012 general election, Romney received only 27%, according to the Roper Center[4].

I’m still a die hard Cruz fan, but I have to say I enjoy watching Trump in action. I can’t help myself. He is now 16 points ahead of Kasich in New Hampshire and Bush? Please, the joyful tortoise is just tragic. Bush has lost[6] almost half his supporters in New Hampshire since July, when he was in second place behind Trump with 14 percent to Trump’s 21 percent. Since February, he’s lost almost two-thirds of his support, when he was at 18 percent. Bush’s support in Iowa also dropped by half. In July, he placed third with 12 percent. Only 6 percent of likely Republican voters in the Hawkeye state chose him as their first pick. It would appear that Trump’s strong stance on immigration is rocking America. 56 percent of Republicans look at Trump favorably, up from 39 percent in July. Trump appears to have won over a significant bloc of GOP voters: his unfavorable ratings declined from 53 to 39 percent in two months. A landslide is in the cards at this rate for Trump and the Republicans will not be able to stop him.