I’m telling you, the people around Trump are just full of surprises[1]…

It has been reported that Secretary of State Rex Tillerson qualified Iran to be in compliance with the terms of the horrible deal negotiated by former President Barack Obama and his administration. This was all made clear in a letter that was sent to Paul Ryan. But there’s one huge detail that Tillerson added.

According to a report[2] given by Red State:

“Compliance, according to the stipulations of the agreement as negotiated by the Obama administration and others, is to be rewarded with sanction relief. Despite the Trump administration’s conclusion that Iran is currently complying, the letter Secretary of State Tillerson sent to Congress indicates that neither he nor President Trump feel beholden to lighten the sanctions.” 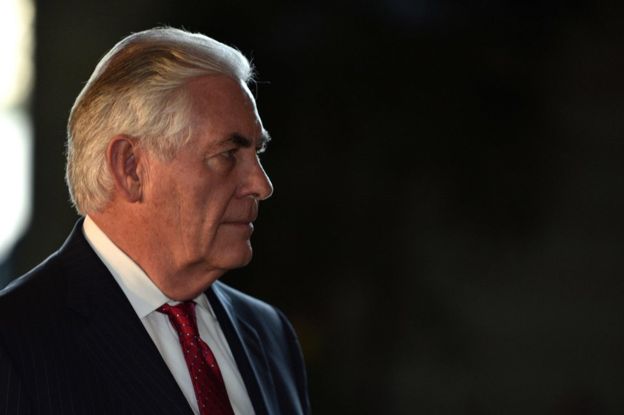 That really didn’t matter to Tillerson, who claimed to have other plans for the deal:

“But he hastened to add that Iran’s role as “a leading state sponsor of terror through many platforms and methods” has the Trump team debating whether to stick with the agreement.”

“President Donald J. Trump has directed a National Security Council-led interagency review of the Joint Comprehensive Plan of Action (JCPOA) that will evaluate whether suspension of sanctions related to Iran pursuant to the JCPOA is vital to the national security interests of the United States,” Tillerson wrote, using the formal name for the nuclear deal.”

Obama had lifted a few of the sanctions accompanying the Iran Deal, but it was Iran being the LEADING STATE SPONSOR OF TERRORISM that got them sanctioned. That, along with the numerous human rights offenses had nothing to do with the previous deal.

So sorry, Iran! Not.

Sec. of State Tillerson: "Iran is the world's leading state sponsor of terrorism. It is responsible for intensifying multiple conflicts." pic.twitter.com/EZsE5I6p9v[4]