I’m sure you’ve all heard that ESPN[1] canned Curt Schilling last week over an anti-transgender meme. Sarah Palin is now ripping ESPN a new one over it and rightly so. ESPN calls itself ‘inclusive’. What a joke… unless you are white, conservative and straight that is. She posted a cartoon to her Facebook timeline that was spot on. In the cartoon, a white “victim” whines about how a “micro-aggressive white privileged homophobe” has invaded his “safe space,” beside a little girl labelled a “bigot” for pointing out that an adult man happens to be in the ladies room. One is moronic, the other is alarming. Guess which is which? The cartoon, drawn by Glenn McCoy, summed up how liberals think and how their logic is dangerous to the world in general. 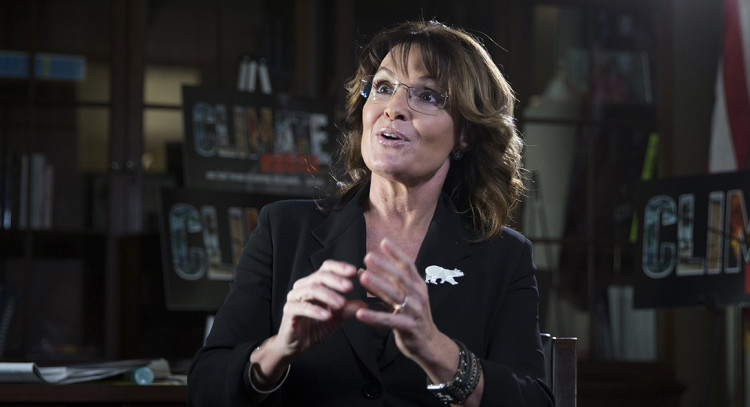 Former Republican vice-presidential candidate Sarah Palin addressed ESPN’s firing of Curt Schilling over an anti-transgender meme in a way that spotlighted how the company continues to mislead the public.

On Wednesday, ESPN announced that it had fired Schilling[3] over the meme, claiming that it was an “inclusive company” and Schilling’s uncomfortable truths[4] were simply unacceptable.

Palin defended Schilling and responded to ESPN by posting a cartoon titled “Fundamentally Transforming America – B. Obama” to her Facebook page.

The fallout is already beginning over this insanity. Men have been caught in bathrooms videoing girls showering and others going to the bathroom. It’s a buffet for perverts. Any bets on how long it is before a father or husband loses it and someone really gets hurt over this? The image that got Schilling fired showed an overweight man in revealing clothes wearing a blond wig. The caption read, “Let him in! To the restroom with your daughter or else you’re a narrow minded, judgmental, unloving, racist bigot who needs to die!!!” Schilling posted the image after North Carolina’s House bathroom bill passed last month. The bill ordered that individuals must use restrooms according to the sex stated on their birth certificate rather than the sex with which they identify. Schilling defended his repost of the image on his personal blog where he said that those who were offended were the ones with the problem. And he’s right. Palin’s right as well… ESPN screwed up big time, but Schilling will come out on top over this. ESPN, not so much. 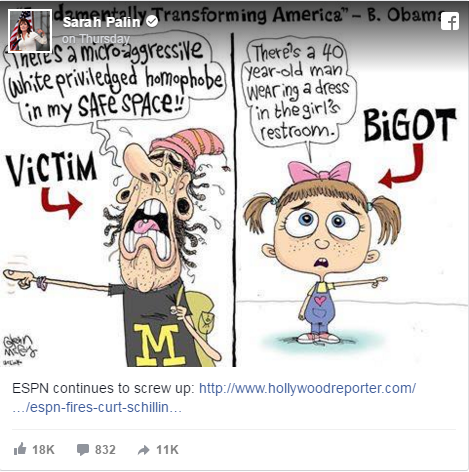