Sarah Palin has had enough of the Establishment Republicans in D.C. fighting harder against the conservatives who put them in office than the Democrats and she’s firing back[1] at the corrupt bastards in D.C. 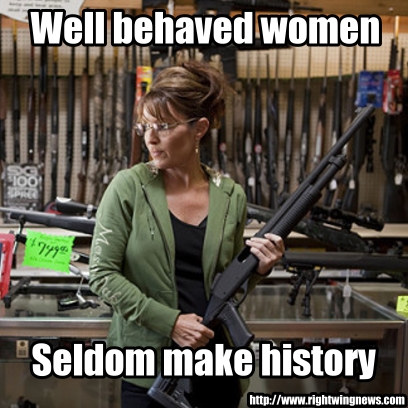 In Alaska we had a group of politicos who chuckled as they dubbed themselves the “CBC,” which stands for “Corrupt Bastards Club.” But it was no laughing matter. I, and many others, took them on. We won. When I served as chairman of our state’s Oil and Gas Commission, I reported on the cronyism of the chair of my own Party, who had been appointed by our governor to that same energy regulating commission. (Click here to see a reporter’s reaction to a short Newt Gingrich interview on the matter.) The whistle blowing resulted in him receiving the largest ethics fine in the state’s history. But that was just the tip of the oily iceberg. The FBI investigated Alaskan lawmakers for taking bribes from the oil industry in exchange for votes favorable to that industry, and politicos ended up in jail.* The lawmakers actually called themselves the Corrupt Bastards Club and even emblazoned the CBC initials on baseball caps they gifted each other — that’s how untouchable they believed they were. But average, concerned citizens said, “enough is enough,” and shook things up. Though some of the CBC members ended up in horizontal pinstripes, much of the compromised party apparatus stayed in power.

…Today, doesn’t it seem like we have a Corrupt Bastards Club in D.C.? On steroids? It might not be as oily and obvious as its Alaska counterpart, but it’s just as compromised because its members, too, are indifferent to what their actions mean for We the People.

I’m prepared to be attacked for suggesting this comparison of the D.C. political establishment with the CBC. But I call it like I see it. And lived it. The fight over defunding socialized healthcare, aka Obamacare, should have opened everyone’s eyes to call it the same.

…Americans, if you’re faced with a 300% increase (or even a 65% increase like my family) in your health care premiums for crappier coverage, doesn’t “free” socialized medicine all of a sudden sound appealing?

And that’s how Americans will be led down the primrose path to a single-payer system. People will be frustrated, worn out, and broke under this new government burden. Many will end up concluding they’ll settle for — then demand — full socialized medicine because they’ll see how the unworkable Obamacare will break our health care system (where, presently, no one is turned away from emergency rooms and we have many public and private safety nets for people in need), along with busting our personal bank accounts. The cry will go out, “Can’t you just put us all in a sort of Medicaid-like system? It’ll be much less confusing than these awful exchange websites and a lot less expensive!” As things stand, many who are getting slammed by Obamacare will inevitably settle for less out of necessity. And that’s the left’s declared plan: a single-payer system. They said it. I didn’t.

…When Harry Reid laughs and says, “Yes, yes! Absolutely, yes!” when asked if his goal was to move Obamacare to a single-payer system of full socialized medicine, he’s spilling the truth. The evidence is right before our eyes. Please open yours, GOP establishment.

…So what was the GOP establishment’s game plan to fight this march towards socialism? They’ve been busy denouncing Sens. Ted Cruz and Mike Lee and their supporters, along with the good House Members who fought for our one chance to defund Obamacare. But what were the wayward Republicans’ alternative plans? They thought we could ignore the implementation of Obamacare and simply focus on some future electoral victories in the hope that some day the stars will align and we’ll have super majorities in the House and Senate along with a Republican president who would hopefully repeal this disastrous soon-to-be set in stone new “entitlement.”

There’s a big problem with that scenario. It overlooks the everyday reality before our eyes. As Obamacare is being implemented, Americans can’t afford to pay for it. We can’t even sign up for it on the impossibly cumbersome websites, but the IRS will fine us for not doing so anyway! Obama gave his pals, and Congress gave themselves, tickets off this train wreck via waivers. Cruz and Lee fought for us to get the same relief the big guys got. The media and disloyal politicians turned on them and, divided, we lost. Now we little guys are stuck on this train, which will soon collide with hardship and real-world economics that don’t pencil out. Friends, by the time the electoral stars align for this hoped-for GOP hat trick the country will be out billions, if not trillions, more of our tax dollars and will have already begged D.C. to relieve us of this corporatist nightmare even if it means a socialized single-payer system. And once there, do you think we’ll ever go back and strip this “entitlement”? Unarguable history proves otherwise.

The only credible plan of action was to do everything in our power to delay the implementation of Obamacare — defund it, postpone it, whatever — while at the same time work to elect a majority to repeal it. That is what Cruz and Lee and those Tea Party aligned House Members were doing. There was no other credible alternative plan to seize the constitutionally appropriate opportunity to legislatively close the purse strings to stop the juggernaut of full socialized medicine.

….GOP politicians claim they’re against Obamacare and promise to repeal it. But when it came time to stand up and use the Constitutional tools they have — the power of the purse strings — to finally halt the implementation, they balked, waved the white flag, and joined the lapdog media in trashing the good guys who fought for us….

…The media wants you to believe that the partial government shutdown “fractured” the Republican machine from grassroots commonsense conservatives who go by the acronym TEA Party (that stands for “Taxed Enough Already”). No, Tea Party patriots rose up because the Republican machine “fractured” itself years ago by marginalizing its conservative base. The recent “slimdown” didn’t cause the fracture. It happened because of the fracture — because wayward Republicans have refused for years to stand up and fight for economic freedom and limited government, despite campaigning on those principles every election cycle. That’s how we got into this debt-ridden mess in the first place. They campaigned one way, but governed another.

It’s the establishment’s choice whether this fracture remains unfixed because the conservative grassroots will never give up the fight for freedom. Never. Never. Generations of our sons and daughters sent off to war to protect our freedom have paid too high a price for us to ever give up the fight.

I’d rather spend my time fighting the Democrats instead of the Establishment Republicans in D.C., but if the only way to save this country is to defeat them first, then that’s what we’ll do.