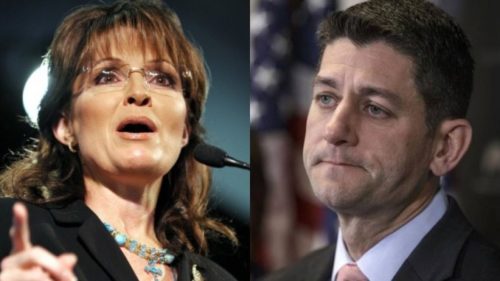 Former Governor of Alaska, Sarah Palin, was interviewed on Breitbart News[2] Saturday on SiriusXM 125 the Patriot Channel. The topic? The repeal/replace of Obamacare and the disagreements on content, between GOP Conservatives and Speaker Ryan. As always, Gov. Palin is well spoken and straight to the point. She’s a team player, but is asking the GOP to take their time and do this thing right.

She said, “I do want to speak about this, but I am tempted to say not another word from our fearless leaders about this new form of Obamacare that I’m going to call RINO-care—not another word from them until we are definitively told that there is no provision whatsoever allowing Congress to exempt itself whatsoever with this law,” Palin said. “As with anything else mandated by Congress, every single dotted I and crossed T better apply to them, too, and not just the people who they are lording this thing over because remember this is government-controlled health care, the system that requires enrollment in an unaffordable, unsustainable, unwanted, unconstitutional continuation of government-run medicine, and even in this new quasi-reformed proposal, there is still an aspect of socialism. That’s the whole premise here.”

She continued by saying, “This 30 percent additional fee will be collected by some in the private sector, which will mean politicians are allowed again to pick the winners and losers, and it makes you wonder who’s lobbying hardest for aspects of this new bill because obviously there are special interests involved. Otherwise, certain private sector segments of our economy wouldn’t be rewarded as they will be with this fee, instead of going to the IRS going to private companies,” Palin said. “It would be really helpful if every single one of these politicians would do like the NASCAR drivers do—and it’s been said before—but let them wear their sponsors plastered all over their three-piece suits when they show up so we know what side they’re on and who they’re actually doing their bidding for.”

She cautioned, “But we can’t lose sight of the entire premise between the whole pro-Obamacare and the pro-RINO-care arguments,” she continued. “It’s so wrong because it’s still so unconstitutional. It’s still taxation without representation. It still picks winners and losers because some corporations get to opt out of the requirements that hit everyone else. It still infringes on states’ rights, and it still weaponizes the IRS against Americans who just simply seek freedom and choices and sensibility in their families’ health care. The IRS will be taxing aspects of this without representation because we have no choice. We’re shackled to politicians’ whims and special interests’ bullying interests, which does violate the Constitution, and it actually allows government to have a lien on our health.”

And Palin called the GOP to account by saying, “People need to know it’s the foundation, it’s the premise,” Palin said. “I don’t know why we’re still even giving an inch on aspects of socialized medicine via this new RINO-care proposal. Is that okay with conservatives, with Republicans in office? They say they want the patient first. They say they want freedom. They say they want a free market to drive the insurance system that we have in America. But no, government is still in control. Government actually has a lien on our health because they lord over us penalties if we want to opt out of a big government mandate.”

By way of reaching out on the things that unite the GOP, she explained, “There is much that we agree on,” Palin said. “Thank the Lord, we all agree that Obamacare is devastating one-sixth of our economy. That’s what health care encompasses. Once the government took it over—it obviously is unaffordable, unsustainable and unwanted. So, from the get-go, thank the Lord we all have that in common, and we want to do away with Obamacare. I would ask Paul Ryan’s forgiveness if I come across sounding like I’m just whining and complaining about a problem without proposing a solution. Like Teddy Roosevelt said, that is the definition of whining. So I want to propose solutions, and I want Paul Ryan to listen to the people who are suggesting that, okay, if government is going to be this involved in our healthcare system and choices, then allow the states to take this over. Get it out of big government’s hands. The most responsive level of government is that which is closest to the people. If you’re not going to allow individuals to have the freedoms and the autonomy and the choices provided in their health care, at least let it be a states’ rights issue. So that’s one.” 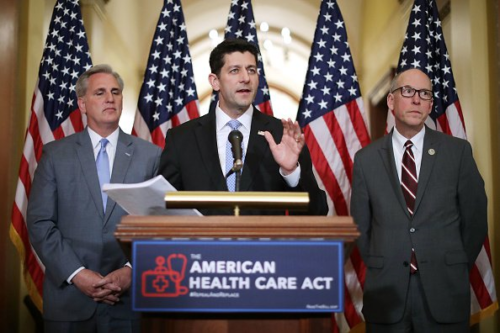 In pointing out some defects, Palin said, “And then let’s talk about the tort reform that I still don’t see in the new proposal,” Palin continued. “I’d like Paul Ryan to address that more clearly. I’d like him to really talk about how he proposes to tackle the waste and the fraud in the healthcare system. I’d really like him to talk about the interstate commerce allowance now because we know that that has caused a lack of competition, and I really want him to address just that good old American freedom of choice. How can he convince the American people that this isn’t just still big government in bed with big pharma and big Wall Street and sticking it to the people with all its globaloney that was part of Obamacare. How is this RINO-care any different?”

She concluded by saying about President Trump, “He will step in and fix it,” Palin said. “I have great faith that President Trump is one who will fulfill campaign promises. He already has a track record of doing so well in these first months, I’m just really proud to have been part of the constituency that wanted him in there and worked hard to get him in there. So, yeah, I’m sure that President Trump is going to do the right thing and listen to all sides, of course, but understand, especially, that as a businessman, he’s going to understand whether this makes sense in his vision of how to grow businesses and how to get government off our back and back on our side. How will we create a smaller, smarter government with a proposal like this that basically allows for the continuation of a growth of government? That’s what any aspect of Obamacare or RINO-care does. So asking President Trump specifically about how running a business, not a Wall Street business, but mom-and-pop main street business, how does RINO-care help their business get to grow and drive and survive in this economy?”

Palin is 100% correct. The GOP needs to slow down and fix the flaws of this bill. We need to return the power to the states and get healthcare back into the free market. A GOP version of Obamacare is not the answer. President Trump, you’ve done a great job keeping your campaign promises. We are trusting you to fix healthcare properly, not simply rush something through.