Sarah Palin is warning[1] that Americans will rise up and all hell will break loose if the GOP rigs the convention and takes the nomination away from Donald Trump or Ted Cruz. I guess she’s not playing around anymore and is getting very serious about this. She is, of course, exactly right. I’m not for Trump, but if he wins the nomination fair and square, the party better let him have it. The same goes for Cruz. If it goes to a contested convention, they had better let the ballot results play out fairly and not try to select a candidate of their choice to get rid of Trump and Cruz. Republicans won’t stand for a rigged convention this time around… if it happens, the party will be over and you could see riots and a revolt as a result. 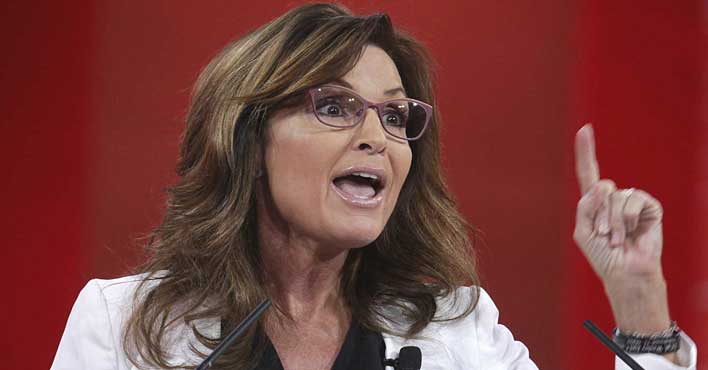 Voters will “rise up” in opposition if Republican power brokers try to take the presidential nomination away from Donald Trump or Ted Cruz at the GOP convention this summer, Sarah Palin said Thursday in a wide-ranging interview.

The 2008 vice presidential nominee told The Associated Press that GOP voters have the right to decide the party’s nominee and will rebel if House Speaker Paul Ryan or some other “white knight” is chosen at a contested convention. Ryan said this week he will not seek or accept the nomination.

Palin said voters know better than to be fooled by party leaders.

“How dare they?” Palin asked, denouncing “arrogant political operatives who underestimate the wisdom of the people.”

If party leaders try to intervene at the July convention, “we will rise up and say our vote does count, our activism does count,” she said.

Palin said she is not convinced by pledges from party leaders that the GOP nominee will be chosen from among those running for president.

“There are some snakes in there,” she said of party leaders. “I’ve had to deal with the political machinery my whole career.”

Palin said she plans to attend the convention in Cleveland, but she conceded that she may have to “invite myself to the party.”

I’m not a fan of Palin these days after the way she has attacked Ted Cruz. But she gets this exactly right. I think Palin should be at the convention. She’s a major player. Let everyone have their voice be heard and let the games begin. “I can’t see any of them inviting me,” she said of party leaders. “I think they are afraid of what I would say.” Palin, who has endorsed Trump, said she is confident he will win the GOP nomination, but said she can support Cruz if he emerges as the nominee. That’s news to me and I’m sure it is to Cruz as well. It’s hard to support someone you accused of being a liar publicly, but I guess she thinks it’s just politics. She said she backs Trump because he is “so reasonable and so full of common sense and knows that for America to be great again we have to develop our natural resources” such as oil and natural gas. I would have thought Palin had more sense than that, but hey… to each her own. While Palin said she could support Cruz, she said it was “unfortunate that he has people around him who are not truthful. I sure want to believe it’s the people around him and not Cruz as a person who would flip-flop on so many issues,” including trade and immigration. That’s rich considering how Trump has lied every step of the way and flip-flopped repeatedly on every single issue out there. Conservatives are fed up, but Palin should be careful on calling herself conservative anymore. When it comes to her chosen candidate, she chose poorly.